A breakdown in communications

Why is it still a struggle for the emergency services to find those they need to help? 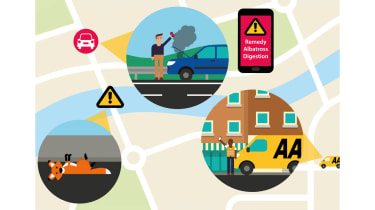 I got home at 2am last night. No, I didn’t leave a nightclub with a couple of lucky foxes, I left the A27 with one particularly unlucky fox embedded in my car radiator. In case you’re wondering what cooked fox smells like, it’s nothing like chicken.

I hit the poor beast right by Brighton & Hove Albion’s stadium in Falmer. If you’re hoping for convenient landmarks to break down next to, a massive football stadium that can probably be spotted from space isn’t a bad one.

And yet, despite telling the bloke in the AA call centre that I’m broken down on the slip road right next to Brighton’s stadium, they dispatched the police – who had to attend because I was in a live traffic lane – and their own recovery vehicle to Devil’s Dyke, some eight miles away. I mean, you can probably see the stadium from there.

How is this even possible on the cusp of 2020? I’m talking to the AA on a smartphone fitted with GPS radios that are so accurate they can tell what lane I’m in on a motorway, and yet the police and the AA’s own rescue vehicle spent more than an hour on a wild goose chase around dark Sussex roads because the call centre is still relying on misheard instructions.

Now, to be fairer than the AA has any right to expect, the company does have a smartphone app that you can tap to report an accident, which sends your precise location to the help centre. However, my membership comes via my bank, which requires you to call a hotline to report incidents.

Even so, there are brilliant apps that could have saved me, the Sussex constabulary and the busy breakdown firm a lot of time. Take the magnificent What3words, for example, an app that I actually do have installed on my phone after writing about the firm last year.

What3words has broken the entire globe down into 3x3m squares. Each square is given a unique three-word identifier so, if you get lost, you just ask the app to pinpoint your current location using the smartphone’s GPS and it provides a three-word phrase to give to the emergency services. They then type that same phrase into the What3words website (what3words.com) and know exactly where you are within seconds.

The beauty of What3words is it’s ideal for any location that’s tough to describe. Whether it’s a house down a country lane where postcodes cover several square miles, the middle of a country park with no discernible landmarks or right next to THE BIGGEST FRIGGING LANDMARK IN THE ENTIRE COUNTY (deep breaths, Baz), the app can direct someone so close that they’ll be invading your personal space.

Alas, the AA man had never heard of What3words. When I told him I had broken down at “remedy albatross digestion”, he wasn’t sure whether to call an ambulance or to get the police to breathalyse me.

So I’ve got another three words for the so-called Fourth Emergency Service: sort it out. And three for you: Happy New Year