Why TfL's 4G plans must be stopped in their tracks

If continuously refreshing your Twitter feed dozens of feet underground isn’t the future, then what is? 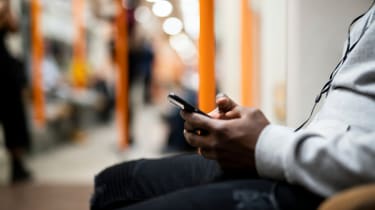 The best part of my evening commute, apart from when it ends, happens when my Northbound train pulls into Finchley Road, emerging from the darkness of an underground tunnel and its dearth of mobile phone reception.

This is because I’m on the receiving end of 4G signal for the first time in the 17 minutes or so since boarding a train at Euston Square. Granted that might not sound very long, but in the age of uninterrupted connectivity – and mild smartphone addiction – getting back online is sweet, sweet relief.

London is, by any measure, among the most connected cities in the world, but there’s a glaring void that stretches the lengths of Transport for London’s Tube network. It’s a sprawling dead zone that spans miles of underground tunnel, forcing commuters to look up beyond their smartphone displays, read something (most likely an ad), or confront their own thoughts.

Plans are afoot to change this, with trials to bring 4G connectivity to the Tube underway from March, and as you’d expect my voice was among the thousands saying “about time”. After all, even the carriages that run throughout Moscow’s stunning 1930s metro system, with its marble and mosaic-studded Stalinist Architecture, have been graced with Wi-Fi connectivity for years. They're also fitted with LCD TVs and lined with spacey LED lights, but that's another story.

There’s no denying that filling out network gaps, wherever they may arise, is an objective good. Being able to receive a reliable signal is essential for simply existing in today’s world, let alone the multitude of productivity benefits it brings; from flexible working to remote conferencing.

Now that 4G is inevitably coming to Londoners’ commutes, we can all avail ourselves of these amazing opportunities – absolutely none of which I’m remotely interested in taking up. I know, as a matter of cast-iron fact, that I’ll just use this technological gift to hunt the vast stretches of my Twitter feed for goose memes.

It's a sad but honest truth that's led me to rethink my enthusiasm for TfL’s plans altogether. I’m already glued to a multitude of screens as it is, and I’ve come to appreciate those moments of silence in between the waves of digital white noise that we passively absorb above ground. To some extent, being holed up beneath the surface has become a breath of fresh air in between a continuous barrage of notifications, recommendations, emails, texts, buzzes and pings that continuously wrestle for my attention. The “sweet, sweet relief” of returning back online at Finchley Road, it turns out, is simply the hollow sensation of getting my fix.

Putting that aside, what does it say about our attitudes to work that we’re keen to celebrate the ‘productivity’ gains this will bring? I'm a big believer in maintaining a healthy work-life balance, and that means keeping off emails and productivity apps outside of working hours unless absolutely necessary. Wind forward eighteen months and I can picture myself marauding through Tube carriages at random with a megaphone, shouting at commuters to put away their phones in the interests of their own sanity.

Maybe it’s the hermit in me, but there’s something truly calming about being forced completely off the grid, if only momentarily. Conversely, there's something intensely frantic about the thought of being directly wired into the apps and services that augment our personal and work lives on a 24/7 basis. Therefore, it's sad knowing that sooner or later the last true dead zone in London will be assimilated into the digital world as if it was a problem that needed covering up. In fact, the reverse is true. Introducing 4G into the tunnels of the London Underground is a solution for a problem that never existed. Progress, however, is inevitable, and if continuously refreshing your Twitter feed dozens of feet underground isn’t the future, then what is?