Virgin Media went offline for thousands of users on Monday evening, with some reporting that problems have continued into a second day.

The broadband provider said the issue was "fully resolved" in the early hours of Tuesday morning after intermittent outages began just after 5 pm on Monday.

However, over 1,000 outage reports were still coming in as of 10 am the next day, according to Downdetector.com. A large number of these complaints came from the UK's major cities, but it looks like issues persist across the country.

On Monday evening, the network provider tweeted that an "issue" was causing broadband connectivity to drop "for a few minutes" and blamed it on a "technical fault", rather than a spike in usage.

A Virgin Media spokesperson told IT Pro that it was "fixed in the early hours of this morning", but there are a number of reports that the issue is ongoing.

"We are aware of an outage that happened yesterday evening," the company replied to one customer. "This outage may have affected your service and we apologise for any inconvenience that may have been caused. This outage was fully resolved just after midnight. If you are still having any problems with the service, please reboot the system and this should restore things for you."

Downdetector recorded over 30,000 complaints when the service first went down on Monday evening, with repeated spikes from 5 pm to 1 am the next morning. Although the numbers have dropped, over 2,000 customers were still having issues at around 10 am on Tuesday. 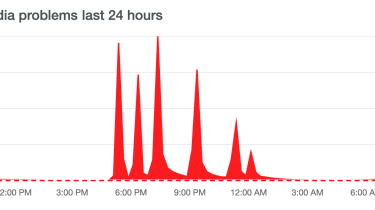 Virgin's IT teams are still investigating the root cause and are advising customers to reboot their systems to solve the issue. Its customer service team is busy replying to complaints on social media and also engaging in some light-hearted banter.