Samsung continues its dominance of the smartphone market, while Huawei makes market-beating gains 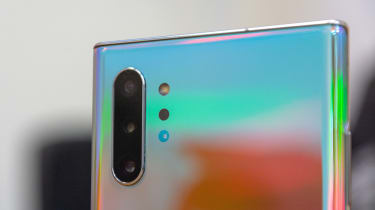 A report from analyst firm Gartner revealed that although the global smartphone market contracted 0.4% in Q3 2019, the champions of the mid-tier markets are consistently growing.

Huawei, Samsung and Oppo all increased their market share in Q3 2019, while Apple and Xiaomi declined.

"For the majority of smartphone users, desire has shifted away from owning the least expensive smartphone," said Anshul Gupta, senior research director at Gartner.

"Today's smartphone user is opting for mid-tier smartphones over premium-tier ones because they offer better value for money," he added. "In addition, while waiting for 5G network coverage to increase to more countries, smartphone users are delaying their purchase decisions until 2020."

Huawei's growth was particularly notable considering Google distanced itself from the embattled company. Gartner said Huawei was the only company out of the top five smartphone vendors to achieve double-digit sales growth in the quarter (specific to the Chinese market).

The results are a testament to how well its business is doing despite being all but segregated from the lucrative Western markets. 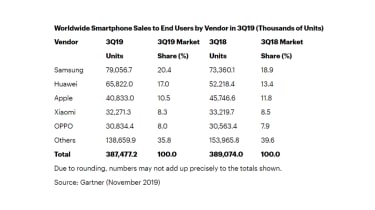 Despite a strong early adoption of Apple's latest line of iPhones, it wasn't enough to save it from losing market share to its mid-tier Android competitors.

"In the Greater China market sales of iPhones continued to improve, however, it follows a double-digit decline recorded at the beginning of the year," said Gupta. "The iPhone 11, 11 Pro and 11 Pro Max saw good initial adoption, which suggests that sales may be positive in the remaining quarter."

The results from Gartner echo the industry trend which has seen smartphone vendors flood their portfolio of devices with different models, focussing on specific niches particularly in the mid-tier range.

Samsung is one example of a vendor which has a vast amount of devices in its current lineup, offering more choice for less money.

"Samsung's aggressive revamp of its portfolio, with a focus on mid-tier and entry-tier segments, strengthened its competitive position," said Gupta.

Oppo is another vendor which not only gained market share but has also joined the trend of releasing many similarly priced devices in the same portfolio. In its current Reno series, it has six different iterations alone with other models in the wider portfolio too.

"For sure, some [vendors] are flooding the market in order to steal market share," said Paolo Pescatore, tech, media and telco analyst.

"Let's not forget most of the activity seems to be focussed among Asian manufacturers who have aggressive overseas plans," he added. "The biggest challenge remains differentiation in an era where all devices look the same."

Gartner added that Black Friday and Cyber Monday will likely reignite sales in the approach to the holidays so we may see a change in the results, come the end of Q4.