The Escobar Fold 1 features a 7.8” flexible AMOLED display and will be shipped worldwide from $349 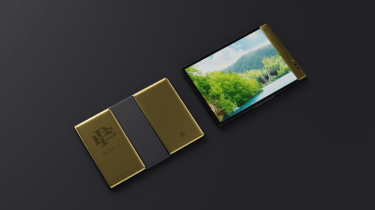 The brother of notorious drug lord Pablo Escobar, Roberto Escobar, has jumped on the 'foldable' craze by launching a surprisingly affordable Android-powered flexible smartphone through his company, Escobar Inc.

Built from stainless steel and finished in gold, the Pablo Escobar Fold 1 is fitted with an eighth-gen Snapdragon chip and features a 7.8in AMOLED display that folds out into a full-sized tablet.

The handset's launch has come with a catalogue of surprises beyond the fact it's been designed and marketed by Pablo Escobar's brother. Escobar Inc's previous product launch was a $249 flamethrower with a 20,000 unit production run.

The biggest shock with the Escobar Fold 1 is undoubtedly a rock-bottom $349 (£267) starting price, which is a massive divergence from a market in which competitors cost at least five times as much. The Samsung Galaxy Fold, for example, can be purchased in the UK for £2,429 at the time of writing.

For this cost, moreover, users can expect a high-octane Qualcomm Snapdragon 855 chip, as well as up to 8GB RAM and 512GB of storage in the higher-end unit.

The phone harbours a 7.8in display with a 1920 x 1444 pixel resolution, as well as a 4,000mAh battery to complement a vast array of ports and buttons as well as a fingerprint reader and a dual-lens camera.

Considering the specifications, a $499 (£382) price tag for the higher-end unit, almost defies logic in light of the manufacturing costs understood to be associated with producing foldable handsets at scale.

Escobar Inc has, however, signed a licensing deal with a firm called Pablo Phone Ltd, which is being handed manufacturing and distribution responsibilities for the UK. Pablo Phone Ltd is registered with Companies House and lists Roberto Escobar as a director.

The Escobar Fold 1 is the most recent, and arguably most unusual, foldable handset to launch in the last couple of years. Samsung and Huawei were first out of the block with the Galaxy Fold and Mate X respectively, although have suffered setbacks in manufacturing and distribution.

Motorola, meanwhile, has resurrected its iconic Razr handset as a foldable with a clamshell hinge that collapses a 6.2in display into a more compact unit with a much smaller outer display.

This is against the general trend of foldable phones adopting a bookfold design and opening out into expansive tablet-sized devices.