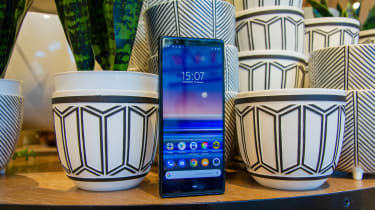 You'll be forgiven if you missed the Sony Xperia 5 last year. After all, 2019 was the year smartphones tried to fold at the screen; we had the Galaxy Fold, the Mate X and the Motorola Razr all capturing our imaginations. And even standard models raised the bar with the Galaxy S10 and the Huawei P30 Pro taking screens and cameras to new heights.

When the Xperia 5 was launched, you may have thought it was the Xperia 1 and moved on, because it is very similar. But we think it's worth a longer look because there is a lot more going on here than just some 'little version' of a flagship.

We don't think Sony intended to release a 'compact' version of the Xperia 1, which was launched earlier in 2019, but the 5 is an almost exact replica - just slightly smaller. It has the same square, tile-like shape that's very slightly curved at the corners, but it's a more slender handset with an 8.2mm thickness and a 68mm width. Both of these make it easier to operate single-handed, but also accentuate its height - which is strange, because at 157mm it's much smaller than the Xperia 1, yet it still pokes out the top of whatever pocket it's in.

The back cover is all very modern with a stylish, minimalistic design. It comes in black, grey and blue, which are unusually plain names considering all the 'Pink Gold' and 'Amber Sunrise' that we've grown accustomed to. These actually undersell the 5 slightly because the shades are quite beautiful - our blue review model is stunning.

There's a less edgy look to the front. Literally, as it has bezels at the top and the bottom. Much like the Google Pixel 4, these are eyesores that don't belong in the edge-to-edge world of smartphones and make it look dated up against the competition. 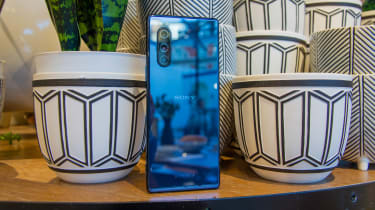 Whatever you watch on this 6.1in FHD+ OLED display looks great as Sony has put a great deal of effort into making its displays 'cinematic'. The Xperia 5, like the Xperia 1 before it, has a 21:9 'CineWide' aspect ratio, which is essentially widescreen. This is good if you hate those black bars on either side of the screen, but it's a little pointless because you'll have to find a movie that uses a 21:9 aspect ratio first. A Spaghetti Western, like The Good, The Bad, and the Ugly, is your best bet as they fit perfectly on the Xperia 5's display.

With our screen calibrator, we found the Xperia 5 delivered a near-perfect colour gamut result of 95.7%. That's not too far off the Xperia 1 and the just below the likes of the Samsung Galaxy S10 and the Huawei P30 - so it's a rather good display. It has that marvellous Bravia TV technology that's been used to produce cinema-quality in the home. Incidentally, it's also used in actual cinemas, with chains like Vue also using Sony's 4K digital projection technology.

Inside the 5 is a Snapdragon 855 processor coupled with 6GB of RAM - exactly the same as the Xperia 1. This came out well, performance-wise, as it notched up 750 for single-core and 2,756 for multi-core in Geekbench 5. These are pretty much identical to the Xperia 1 and considerably more than the recently launched Google Pixel 4.

Although it's not quite up there with the Huawei P30 or Samsung S10, the 5 is very powerful. From our use of the device, which involved lots of streaming, there were no signs of lagging or slow responses. It handles everything your fingers can throw at it, takes on multiple apps like a dream and even powers through the split-screen function (more on this later).

There's a 3,140mAh battery in the Xperia 5 and the main concern with this was that its screen would heavily drain it. On our looped video test, the 5 held out for 17hrs 55 mins, which is not great. That time puts it next to the Google Pixel 4, which is slightly cheaper and has a few more features. These are intensive tests, though, and we found it has the legs to make it from dusk till dawn - if you cut back on all the Netflix, of course. 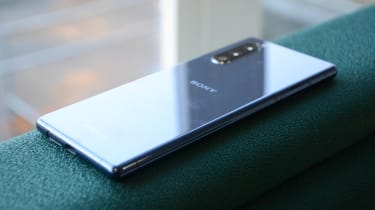 While the Xperia 5 does come with some nice features, these also serve as a list of its problems, starting with the screen. That 21:9 aspect ratio and narrow frame means that it looks odd in landscape mode - all the text is a bit squashed. Also, the dynamic vibration system doesn't fully switch off; anything you listen to that's slightly above the midway point on the volume switch still has a slight rumble.

There's a fingerprint sensor too, which is not only inconsistent, it's on the side of the device, between volume and power buttons, making it a little awkward to use. Same with the NFC sensor; ten minutes in the pocket and it collects all manner of 'tags' that are not there.

You can also split your screen between video and text, allowing you to do things like watch YouTube while composing a message - as foldable screens promised us. This is arguably the one feature that is really useful - real-world useful - but again, that already squished text is even harder to see. Other phones support this feature, such as Huawei's P30, P30 Pro and Samsung's Note 10.

We have three 12MP camera units on the 5, starting with a standard RGB with a wide aperture of f/1.6. The other two are a wide-angle lens and a 2x telephoto zoom sensor. All very good, we have to admit, but 'good' doesn't cut it in the current climate. Huawei, Google, Samsung and all are well ahead of the curve and also on the verge of launching the next best thing in their respective areas.

What does lift the Xperia 5 up, however, is its co-development with Sony's Alpha camera team. As such, this is the first smartphone to introduce eye autofocus tracking and there's also advanced RAW noise reduction filtering tech. Not to mention, 10fps burst shooting. These extras help a rather low key set of lenses (by current smartphone standards) produce quality photos or video content. 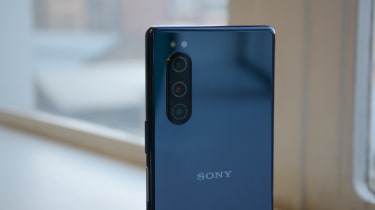 We have some issues with the Xperia 5; the troublesome NFC and Fingerprint sensor, the bezels, how tall it is. These do reduce its appeal and also look pretty bad up against the near-perfect models released throughout 2019. For those looking for a flagship handset, the iPhone 11, OnePlus 7 and Samsung Galaxy S10 are all cheaper.

On the other hand, a lot of people are specifically after a Sony device, and if you liked the Xperia 1 then you should equally enjoy the Xperia 5 because it's almost an exact replica - just smaller and, more crucially, £141 cheaper at £699. Sure, there's some work to be done here, but the Xperia 5 is quite a high five.