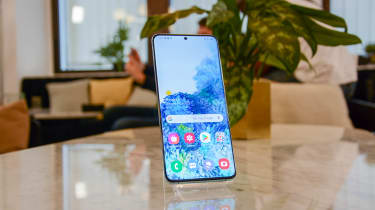 Don’t worry, you haven’t woken up from a decade-long coma - Samsung has chosen to skip ahead in its numbering, presumably to coincide with it being 2020.

Unusual numbering aside, however, the S20 looks like another entry in Samsung’s catalogue of impressive and eye-catching flagship devices, priced at £799 for the S20 and £999 for the S20+. We got some hands-on time with the new handsets to get an early look at just how the Korean company’s new phone feels in the flesh.

The newest member of the Galaxy family isn’t all that different to previous models from a visual standpoint. The familiar edge-to-edge screen is back, complete with a holepunch cut-out at the top for the front-facing camera - although the size of the bezel has been reduced. As usual, there are two variants of the S20 - the regular model and a larger, slightly more capable S20+ version. This year, there’s also a third option in the form of the even more well-equipped Galaxy S20 Ultra, although we’ll be focusing on the regular S20 and S20+ here.

The range comes in a series of fetching colours, including charcoal grey, powder blue, salmon pink, and creamy white. The camera assembly on the rear of the device has also moved from a horizontal strip across the top to a wider, more square configuration running down from the top left corner. It’s also noticeably thicker than last year’s model, which leads to a somewhat irritating case of ‘wart wobble’ when placed face-up on a flat surface.

On the other hand, one of the first things we noticed about the new devices was how light they were. Weighing in at 163g for the S20 and 186g for the S20+ and with both under 8mm thick, they’re surprisingly pocketable considering their size. 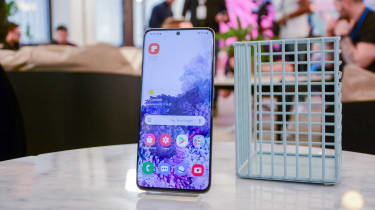 Our favourite part of the design is the fact that Samsung has finally seen sense and removed the Bixby button from the side of the device, finally banishing the also-ran assistant to the bowels of the settings menu where we think it belongs. No more will we accidentally summon it while getting our phone out of our pocket...

The display is always a highlight of Samsung’s devices, so it’s no surprise that the S20’s screen is as marvellous as ever. The 6.2in dynamic AMOLED panel is rich and vibrant, while the QHD+ resolution (the same 3,200 x 1,440 resolution used on the S10) ensures everything is pin-sharp.

The most important change is the 120Hz refresh rate, which makes scrolling through apps and menus feel buttery-smooth. The screen of the S20+ is functionally identical, save for a slightly larger 6.7in panel, but both examples are as impressive as we’d expect.

As per usual, Samsung is using its own Exynos chips to power the S20 range - specifically, it’s using a 2.73GHz Exynos 990 processor, combined with either 8GB or 12GB, depending on the model. This should prove more than fast enough for even the most demanding of users, so we’ve no worries on this score.

Whether the S20 can deliver a decent battery life with all this hardware to support is a more interesting question, but it’s got a 4,000mAh battery behind it - or a 4,500mAh cell in the case of the S20+. We’re also expecting battery features like fast-charging, wireless charging, and wireless power-sharing to make a return from previous generations, but this has yet to be officially confirmed.

Camera technology is about the only area in which smartphones seem to be making consistent progress. True to form, the S20’s camera has been seriously beefed up, and the triple-lens setup now features a 30x hybrid zoom which Samsung is calling ‘Space Zoom’. The three lenses consist of a 12MP f/1.8 lens, an ultrawide 12MP f/2.2 lens and a whopping 64MP f/3.5 3x telephoto lens - which powers that crazy 30x zoom. There’s also a 10MP f/2.2 front-facing selfie camera. 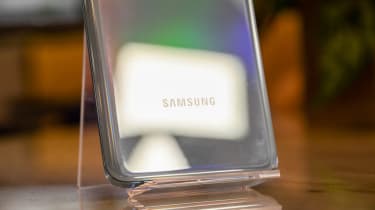 It’s hard to get a real indication of quality without doing more testing, but early results from the camera seem promising. Samsung has revamped the way that the camera works, including a larger sensor which uses nona-binning for improved clarity in night shots. There’s also 8K video recording, improved ‘Super Steady’ video stabilisation (although this won’t work when shooting in 8K) and new built-in rendering tools.

Manual controls for shooting video have also been added to appeal to the lucrative ‘content creator’ demographic. Finally, the new Single Take Mode allows you to capture multiple different kinds of footage - including different types of images and videos - with a single button-press while the new Night Hyperlapse mode enables you to, well, take hyperlapse footage in Night Mode.

The Galaxy series are some of the most capable and feature-rich devices around, and the new models should be no exception. In addition to the previously mentioned battery and charging features, IP68 waterproofing is set to return, alongside expandable storage via microSD card up to a limit of 1TB.

All models in the family will be available in 5G-capable versions (although only the S20 will come with a 4G-only variant), and Google’s Duo video calling service will be integrated natively into the phone’s phone and contact apps, along with exclusive optimisations such as full HD and wide-angle video calling.

We’re expecting Samsung’s outstanding DeX feature to make a return with the S20, along with new capabilities such as integrations between Spotify and Bixby. Biometric authentication is back as well, in the form of fingerprint and facial recognition, and Samsung has added the ability to force-update the security software that underpins these features independently of the rest of the software - an interesting feature that is sure to go down well with security-conscious business users. 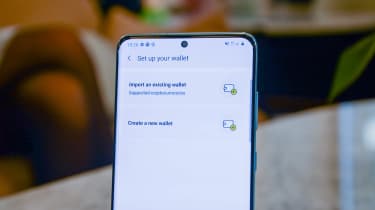 Another interesting (if less obviously useful) feature is the built-in blockchain wallet, which allows users to store private keys for various cryptocurrency and blockchain applications. At present, this is only likely to be useful for hardcore crypto enthusiasts, but if blockchain-based applications take off within businesses, it could be a handy bit of future-proofing.

Samsung has earned a place as one of the top three smartphone manufacturers in the world, and its latest crop of devices looks to be its most promising yet. While not a radical departure from previous iterations, the new Galaxy S20 and S20+ are attractive and well-specced. If they prove to be as good in practice as they look upon first impression, Samsung will probably have another solid hit on its hands.