Cosmo Communicator review: For the few, not the many

Planet Computers' phone-laptop hybrid will be loved - in certain circles

The Cosmo Communicator is a device that's so niche you've probably never heard of it. It's a smartphone with a physical keyboard attached to it, a strange laptop-phone hybrid that has a face only a motherload of nerds could love - but that's all part of its charm.

This is actually the second coming of Planet Computers' Cosmo, following a prototype showcased at CES 2019. It was the successor to the Gemini PDA, which in itself was heavily influenced by the Psion 5 series of PDAs. The idea is to replace your standard laptop and phone with a portable version that's a mixture of both, which is a tall order for such a small device.

Over the years we've been spoiled by smartphone and laptop companies when it comes to design and the Cosmo falls somewhere in-between those two categories, with disastrous results. It's marketed as a phone, but clearly looks like a laptop and is ultimately a device that's too bulky for the former (300g) and too small to be classed as the latter. 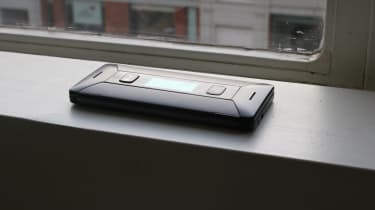 When closed it looks like a brick - the kind that you used to have to retrieve from the bottom of a pool if you've ever taken swimming lessons - with two off-grey bars sandwiching a 1.9in OLED touchscreen. Above and below the display are two button-like features. The top one is a camera and the other is an actual button for yes/no, answer/ignore commands. From this screen, users can change settings, read emails and even turn on a handy torch. It's also worth closing the device just after you turn it on as this external screen has a retro multi-coloured loading display.

The keyboard takes a little effort to open, but that also means it has a satisfying snap when you shut it. The hinge only allows for it to be closed or open to an almost flat angle, which is a little annoying if you want to have the display more upright.

The Cosmo's main display is a 5.99in FHD+ touchscreen with a 2,160 x 1,080 resolution. That doesn't sound bad, but it only covered 87% of the colour gamut. Hardly any worthwhile handset of the last few years has scored less than 90% and pretty much everything released in 2019 and so far in 2020 hit 100, give or take a per cent. Its brightness topped out at 558cd/M2 which is a little closer to the market average, but in real life, the quality isn't too much of an issue. The screen works great in most conditions, colours are not too saturated, and streaming of live TV or Netflix wasn't hampered - in short, it does its job, and you're unlikely to be doing anything requiring top-notch colour accuracy with it.

The front panel is particularly nice as it hooks into the main OS to allow you to open and read the first few lines of an email. From here, you can choose to reply to that email, and the page will be waiting for you when you open the device fully. 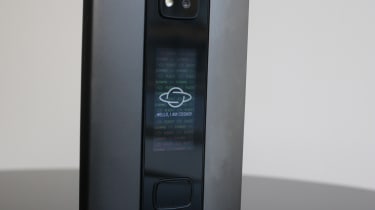 Finger size does come into play here, however, as it can be difficult to use the controls if you have large digits. Calls can be made from the front panel, but they can also be unwittingly ended with the slip of a chunky finger.

The keyboard is the Cosmo's big attraction, and there's plenty to like about it. There is an occasional need to double tap the spacebar, as it doesn't always respond, but the experience is good overall. You're not going to give your laptop up over it, but there are two scenarios in particular where it really shines. For us, the first is on train journeys where there isn't much space for your laptop and you need to do some document or spreadsheet editing. The other is late at night when you need to deal with that important email that can't wait till the morning. The Cosmo fits into the crook of your arm and you can type away under the comfort of a duvet. The adjustable backlighting also helps here.

The keys have a nice punchy feel and plenty of travel, but you won't be reaching the same typing speeds as you would on a laptop. You will, however, do more than you would on, say, a Blackberry. This is again where we point out that it's not for everyone, but for those that want it, you get a lot of quality and also 24 international layouts - le fantastique.

The biggest drawback to the keyboard, ironically, is the fact it's there at all. Mobile operating systems naturally favour portrait mode and many apps simply aren't usable in landscape. There is some difficulty getting around this on the Cosmo - you need to find the "force rotate" option and then awkwardly hold the side of the keyboard to view stuff in portrait mode. Silliest of all, if you get a call when it's open, you have to talk with a keyboard over one eye, depending on which ear you put it to. 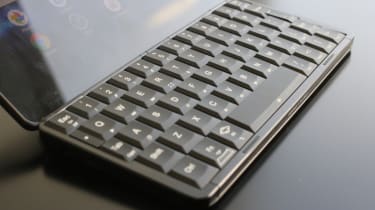 The Cosmo comes with a Mediatek P70 chipset and 6GB RAM (plus 128GB of Flash storage). It scored quite well in Geekbench 5 with 298 for single-core and 1,432 for multi-core. That's faster than the Gemini and also the Google Pixel 3 - although it's not going to worry any current-gen flagships. In the Cosmo's defence, however, it's worth noting that most smartphones have more processing power than they need anyway.

Switching apps, multitasking and watching video is all done with no noticeable lag. It may be mid-range and no match for smartphones like the Samsung Galaxy S20, or the iPhone 11, but it's got more than enough to run the day-to-day basics.

Unfortunately, the Cosmos' 4,220 mAh battery didn't fare so well in our looped video test and only made it through 10hrs and 38mins. That's almost half of what most smartphones can do - almost 8hrs less than Sony's Xperia 5, which is a mid-range device. Worse still, it's a little short of its elder the Gemini, which gave us 11hrs, 6mins.

For real usage, it does require daily charging, - sometimes even twice in 24hrs - and can be a little frustrating if you're a heavy user. Although it speeds through multiple tasks, it also speeds through battery life, sharpish.

The upside to all this is that Planet Computers has used a battery that can be replaced. Most smartphones haven't had changeable batteries for over a decade, but for $79 you can get a replacement for this one and conceivably make your Cosmo last a good few years.

As with all good laptops (but not necessarily phones), there is a decent set of ports on the Cosmo. There are two USB-C slots on either side, one for charging and a second to hook up an extra device - this also can be used for connecting up a USB-C hub. Like the Samsung Galaxy range, this means you can even connect it to a USB-C monitor, mouse and keyboard - although we wouldn't count on getting satisfactory performance out of it in this mode. Again, it's not your laptop, but that's good for a phone, especially considering it has the widely-ostracised 3.5mm headphone jack. 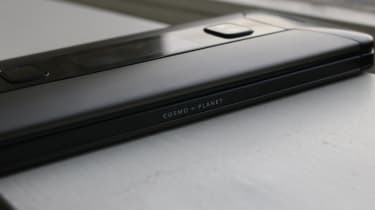 There is a 24MP camera on the Cosmo, with a 5MP internal selfie camera. There isn't a whole lot of quality here, particularly with the selfie cam which we found produced very grainy results, but it's worth bearing in mind that this isn't really the device's selling point.

The Cosmo isn't very pretty, takes terrible photos and often left us with a keyboard eyepatch during phone calls. It's also going to be available soon for the whopping sum of £799 on the Planet Computers website.

Those that want it will surely pay for it. Some 4,000 people backed the Cosmo on crowdfunding platform Indiegogo and many more purchased an original Gemini. The Cosmo has its fans and they may find something to like here. Sadly, we can only recommend it to that small bunch of fanatics; the Cosmo wants to replace your phone and your laptop, but it's not good enough to be either.