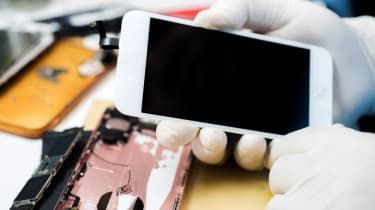 Apple is suing a company it hired to recycle thousands of iPhones, iPads and Apple Watches for allegedly trying to resell them.

Geep Canada is accused of stealing and reselling at least 103,845 Apple products, according to the legal complaint reported by The Logic.

The tech giant sent the recycling firm over 500,000 iPhones, iPads and Apple watches to be disassembled between January 2015 and December 2017. However, during an audit, Apple claims it discovered that 18% of those devices were still accessing the internet through cellular networks.

Geep, which is now owned by Quantum Lifecycle Partners, offered multiple e-waste management services, but its website also stated that its mission was to "encourage reuse whenever possible".

"Products sent for recycling are no longer adequate to sell to consumers and if they are rebuilt with counterfeit parts they could cause serious safety issues, including electrical or battery defects," the company told The Verge.

What's more, that 18% figure doesn't include products without cellular radio, according to Apple, which suggests the actual number of stolen goods is higher. As such, the company is after at least $31 million Canadian dollars (£18 million) from its former partner.

"At least 11,766 pounds of Apple devices left Geep's premises without being destroyed - a fact that Geep itself confirmed," Apple's complaint states.

Geep has denied all wrongdoing and has filed its own lawsuit against three former employees. It claims they stole the devices on their own behalf. Apple has also argued this, claiming the employees were actually senior management at Geep.

Apple, along with other tech companies, has been trying to lessen its impact on the environment. This has often been by using third-party companies to disassemble products to find reusable components. Over the last couple of years, the company has made investments to bring that in-house, including two disassembly robots, Daisy and Dave, which recover iPhone parts.