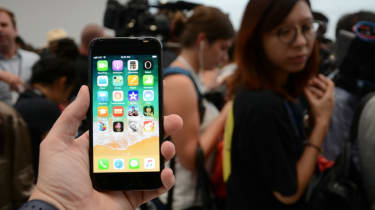 Apple has been tracking iPhones that have been stolen during the ongoing protests across the US.

The company hasn't officially confirmed this, but social media posts, including an image that’s being widely shared on Twitter and Reddit, confirms that Apple has been tracking the location of the pilfered devices.

APPLE DISABLED THE PHONES THAT WERE LOOTED pic.twitter.com/9xp1HhOAeR

The photo shows an iPhone with a message on its display that reads, “This device has been disabled and is being tracked. Local authorities will be alerted.”

The warning asks for the phone to be returned to an Apple Store on Walnut Street in downtown Philadelphia.

That’s one of the Apple Stores that was looted over the past week. During recent protests following the death of George Floyd while in police custody in Minneapolis, looters have taken advantage of the civil unrest to break into Apple Stores in Los Angeles, New York, Philadelphia, Portland, Salt Lake City and Washington, D.C.

With no official word from Apple on the matter, it’s not clear if authorities are actually being alerted to the phones’ whereabouts.

However, we do know that Apple has the technology to remotely track a phone’s location. The company's "Find My app", for example helps users to locate lost or stolen devices.

The recent looting of a number of Apple Stores comes as the company was preparing to reopen more than 100 retail stores across the US.

The stores had been closed for an extended period of time due to the coronavirus pandemic.