Nvidia unveils Tegra 4i smartphone chip with support for 100Mbps 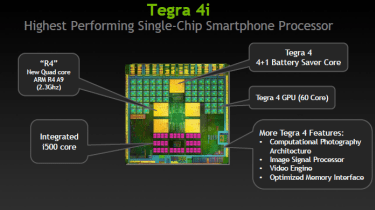 Nvidia has announced its first 4G-ready processor in the form of the Tegra 4i, as the firm plays catch-up to rivals such as Qualcomm.

Specifically designed for use within smartphones, the chip-maker claims the Tegra 4i processor is future-proofed, with the core feature being the integrated Software-Defined Radio (SDR).

The SDR will allow devices using the Tegra 4i to support 100Mbps connections out-of-the-box. The firm also claims that devices can be upgraded via a software update to support theoretical speeds of up to 150Mbps. However, the benefits of such a chip will not be seen in the UK immediately as high-speed mobile internet is still in its infancy.

In terms of performance, the Tegra 4i chip will pack a quad-core configuration of ARM A9 chips which have a clock speed of 2.3GHz. Much like its predecessor, the Tegra 3, the processor also includes a fifth battery saver core which will aim to reduce consumption by performing low-resource tasks and 60 GPU cores.

Nvidia also claims the Tegra 4i is half the size of competing chips, which will allow manufacturers to produce thinner and lighter devices.

Not just content with developing chips, Nvidia has also followed in the footsteps of Intel by unveiling a reference smartphone design. Dubbed Pheonix, the device has a 1080p 5in display and integrated 4G technology.

It is conceivable that Nvidia could bring the handset to market itself, as the firm is increasingly looking to launch products. The firm debuted its Project Sheild handheld gaming device at CES in January.

If competitively priced like the Nexus 4 handset,  a device such as the Pheonix could be a hit. Alternatively, the design may be licensed by operators or OEMs as happened with Intel's Reference smartphone, which came to market as the Orange San Diego.

In a statement to IT PRO, an Nvidia spokesperson provided some clues as to when end users can get their hands on Tegra 4i-powered devices: "We're expecting the first Tegra 4i-powered phones to ship in late Q4, with more phones in early 2014.