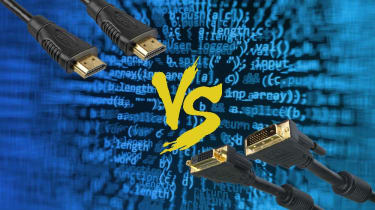 While the sight of masses of cables going into the back of a TV or PC is a nightmare for some, it's worth getting to grips with the various types of cables and ports on offer.

When you buy a new monitor, for example, you'll usually have a cable included in the box. While this is convenient and makes it easy to get started, it's good prices to consider what's best for your setup. The way a monitor or TV is connected to other devices can have an impact on other features, like signal quality, compatibility or contrast ratios.

It often comes down to a choice between two options: HDMI or DVI.

However, there are some significant differences between these two and it's often not very well explained by the manufacturers when you buy them. HDMI stands for High Definition Media Interface and is the standard for HDTVs. It's also on most computer monitors and easy to use, as it carries audio too.

DVI, which stands for Digital Visual Interface, is the older of the two and arguably on its way out. The video signal is basically the same as HDMI, just without the audio.

For a more in-depth look at the two, read our handy guide below.

The first thing you'll notice when you examine the DVI and HDMI ports is that they look very different. HDMI is a much smaller connection - more like a USB than anything else, while DVI is far bigger and significantly more confusing.

In fact, a DVI cable can come in different variations, although the most common layout is a 24-pin setup that looks very much like a SCART lead. Because it's available in different iterations, you'll need to make sure you've got the right one for your particular display.

DVI is available in three primary variants: DVI-I (analogue and digital) and DVI-A (purely analogue), and DVI-D (digital), the latter of these being far more common on the market today. Confusingly, both DVI and HDMI are available in either single-link or dual-link formats, which are cable of supporting different maximum screen resolutions (which we will come onto later).

While different models of HDMI are available, things are kept simple, with newly released versions sticking to a numbered system. Right now we have HDMI 2.0, and 2.1 - the latter of which adds support for resolutions up to 10K, frame rates up to 120Hz and dynamic HDR.

A significant difference between the two is that HDMI supports up to 32 channels of audio, whereas DVI is video-only. Unfortunately, if you have been landed with a DVI cable, you will need to either switch to HDMI or use an additional audio cable to get any sound from a monitor.

Naturally, the biggest question when shopping for cables is that of compatibility. Nobody likes buying a fancy monitor and then finding that their hardware doesn't have the right ports to connect it.

Ultimately, this comes down to what inputs your existing tech has, but it's worth noting that HDMI is by far the most common connection source. An HDMI cable is likely to fit pretty most modern PCs, laptop, monitors and games consoles (although it's being phased out for laptops in favour of USB-C), while DVI is generally rarer. 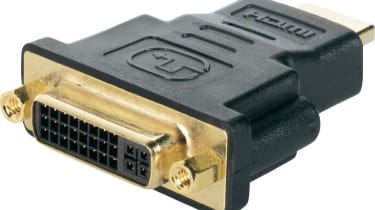 If your laptop has an HDMI input while your monitor boasts a DVI, however, it's not the end of the world - you can buy adaptors for converting HDMI to DVI and vice versa very cheaply from most electronics retailers.

Given that 4K has become a familiar resolution in many offices, the differences between the cables have become more obvious. With HDMI 2.0, support was added for 60Hz (which roughly corresponds to 60 frames per second) at 4K resolutions, whereas this was limited to just 24Hz on previous versions. It also benefits from HDR, a technology that is becoming increasingly available on top-end devices, which essentially allows a greater range of detail across varying light qualities.

Another difference is that HDMI supports HDCP copy protection as standard, whereas DVI doesn't. This is a system that prevents HD content such as BluRay videos from being played on unauthorised devices.

Refresh rate has become an important consideration for those in the market for a new monitor. Higher rates can offer a smoother PC experience that is much easier on the eye, reducing the strain and headaches associated with long days in the office. A refresh rate can be simply considered as the number of frames per second a monitor is capable of putting out, with 144Hz offering a potential 144 frames per second.

In its most recent versions, HDMI has caught up to DVI as both can now output 144hz at 1080p. In fact, HDMI is now considered the better option, as the cable simply supports more advanced technology than its dated counterpart.

For almost as long as electronics cables have existed, there have been shysters trying to flog supposedly superior versions at ridiculously inflated prices. Analogue cables at least had some basis in reason behind this, because poor-quality cables could lead to a deterioration in image clarity.

When it comes to the digital formats of HDMI and DVI, however, the quality of the cable used to transmit the signal makes precisely zero difference.

This means that the gold-plated, carbon-fibre AV leads going for hundreds of pounds are a total rip-off.

HDMI and DVI cables can both be found for under a fiver on Amazon and you might as well pick up the cheapest connector on offer, because your content isn't going to arrive any sharper or any quicker by using an incredibly expensive one.

In terms of functionality, HDMI and DVI cables are basically identical. If you're shopping for equipment to connect up AV gear, whether it be at home or in the office, the most obvious option is to go with whichever cable fits your hardware.

If you need ultra-high refresh rates, your best bet is HDMI, although a DisplayPort cable will do the job just as well.

Ultimately it comes down to your needs. If you've got the option of either, we'd recommend plumping for HDMI. It's more widely-used, meaning it's more likely to be compatible with any future upgrades.