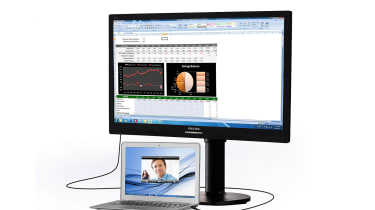 Docking stations ease the pain of a mobile or hot-desking workforce that doesn't sit at the same desk from day to day or even hour to hour. A dock can connect a laptop to several USB devices, an Ethernet connection and a couple of displays all via a single cable. The problem with this is that these docking stations are typically only designed for a particular model of laptop or two with proprietary ports, locking you into a rather expensive bulk hardware purchase. If you let employees choose their own device for work, proprietary docks aren't a cost-effective option.

The Philips Brilliance 221S6QUMB monitor is one solution to this, effectively removing the proprietary element of most docks and turning itself into a hub for any laptop. Plug in the single USB2 input into your laptop and you get access to the dock's RJ45 network port, three USB2 connectors and the display itself. Once you've installed the supplied drivers, it's plug-and-play; the Realtek Ethernet adaptor will show up, as will the video output and any devices you have plugged into the monitor's USB2 ports.

The 21.5in 1920x1080 pixel display is based around a AH-IPS panel which offers reasonable viewing angles and average colour performance. It's good enough for most tasks as long as you don't expect to be doing any colour-sensitive design or photography work. Contrast is high, while text is crisp and easy to read. The anti-glare coating on the screen does its job, keeping harsh overhead lighting from affecting the viewing experience.

There's a rather extreme amount of backlight bleed from all corners of the monitor, with big bright spots showing up particularly strongly in the corners of the screen. This is the clearest sign that a budget panel has been used as the basis for this monitor. 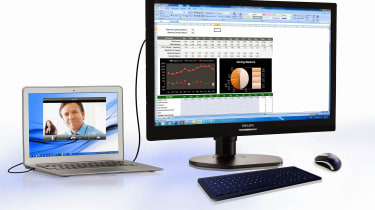 A problem that sometimes befalls cheap USB monitors is a lethargic response time and noticeable lag between your mouse inputs and the cursor movement on screen. In the case of the Philips Brilliance 221S6QUMB there's no such lag. It's certainly not as instant as a high refresh rate monitor connected over DisplayPort, but a DisplayPort-equipped monitor would cost a lot more. The only issue we noticed was a large amount of ghosting with large, fast-moving objects. This was most pronounced with minimising and maximising windows, with the minimisation animation looking noticeably juddery. This didn't affect 720p YouTube videos though, which played back smoothly.

The monitor's build is sturdy, with all the ergonomic adjustments you could want. There's 10cm of height adjustment and nearly 180 degrees of swivel. Pitch adjustment is similarly generous and you can also rotate the screen 90 degrees into portrait mode. Movement was a little stiff, but it was still reasonably easy to make these adjustments single-handed. There are two 2W speakers installed at the front of the monitor, but they don't sound very good so you'll want to have headphones plugged in instead.

The Philips Brilliance 221S6QUMB is an undeniably convenient all-in-one monitor and USB-based docking station for mobile-oriented workplaces. Having the ability to connect your display, peripherals and network to your laptop via a single cable is a real boon. The trade-off is image quality which is very so-so. You can get better quality and larger monitors for around the same money, such as the ViewSonic VX2363Smhl for example. Even if you're hankering after a monitor with docking station features, the Philips Brilliance 221S6QUMB feels like a placeholder product as newer docking station monitors based around USB3 and USB-C are in the works. The Brilliance 221S6QUMB is therefore only really worth buying if you need universal docking stations now and don't need future proofing or the greater performance of USB3 or USB-C.

The Philips Brilliance 221S6QUMB is handy for a mobile workforce, but it's just a little too expensive