Embrace 4K without blowing your budget 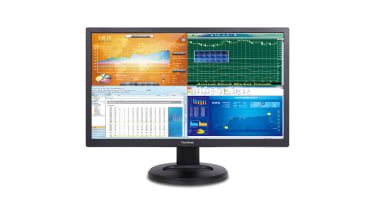 Ultra HD (4K) monitors have been coming down in price for more than a year, with manufacturers such as ViewSonic opting to use cheaper panels for those who want the benefits of the higher resolution without spending a huge amount of money on colour accuracy they don't need. The ViewSonic VG2860mhl-4K is one of these comparatively inexpensive 4K monitors, costing just 359 ex VAT.

The 28in ViewSonic VG2860mhl-4K isn't going to wow your graphic design department with its incredible colour accuracy, but it will certainly improve your ability to multitask thanks to its huge 3840x2160 pixel resolution. That's four times as many pixels as a 1920x1080 monitor.

Of course, with such a high pixel density of 157dpi, objects and text that would have once appeared large on a similarly-sized 1080p monitor will now appear significantly smaller, despite the monitor's big 28in size. This can be partially solved with Windows' display scaling options, but many of your legacy applications may not support high dpi displays that well and may become illegible. It's definitely worth checking if they'll be usable before you buy this monitor.

Also bear in mind that arranging windows on such a large monitor can be very difficult; only with Windows 10 has creating a set of four equally-sized windows become a lot easier, thanks to the OS's improved window management options. If you're on Windows 7 or 8, you may need third-party software such as DisplayFusion to make your windows more manageable.

Away from the resolution, actual image quality is good for the price. The screen has a matt coating, but this does little to deaden the vibrancy of colours, which still appear bright and punchy. There's still a little bit of glare from overhead lights, though, but in most office situations you probably won't notice it.

The monitor has a 10-bit colour processor, meaning it can display 1.073bn colours. As a result, images with more subtle shades are packed with detail and have high contrast levels. This is a great monitor for doing office work or editing photos, as long as you don't care about top-tier colour accuracy, for which you'll need to pay several hundred pounds more for.

The TN panel doesn't have particularly wide viewing angles, and while there isn't too much colour shift in the corner of the screen if you're looking at it straight-on, we did spot a fair amount of darkness creeping in on the left-side of the panel when looking at the monitor straight on, which is worse than the colour shift you'd normally get.

The LED backlight is a little uneven, although at this price it's forgivable. If you're looking at a completely white image you'll notice the extreme corners of the screen appearing a little darker than the middle, where the backlight is at its brightest. In general office use, though, this won't cause any problems.

The VG2860mhl-4K has some practical extra features, too. There is a four port USB hub on the right side of the monitor, so the ports are very easy to access. Two of these ports are fast USB3 connectors, while the other two are slower USB2s so they're more useful for peripherals that don't require speedy data transfers. The built-in hub is handy as a makeshift port replicator for mobile workers who aren't always at their desks and work primarily from a laptop; being able to hook up all your peripherals with one cable is much quicker than plugging them in individually.

There's a generous 130mm of height adjustment as well as an easy-to-swivel base. The base also has a small pocket, perfect for storing desk items such as pens and small stationary. 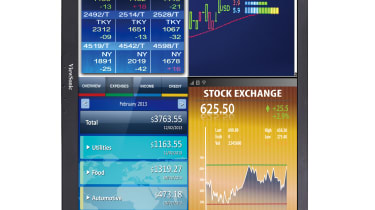 You're spoiled for choice when it comes to connectivity, with a DisplayPort, Mini DisplayPort (which both support Ultra HD content at 60Hz), an HDMI 1.4a port (Full HD at 60Hz) and a DVI connector (2560x1600 at 60Hz). There's also an MHL-enabled HDMI port, which means you can mirror the screen of your smartphone or tablet on the monitor.

Keep in mind you'll need a computer with either a DisplayPort or mini DisplayPort connector to get the most out of this monitor; you could get away with using an HDMI connector, but it can only handle a very jerky 24Hz output at Ultra HD resolution.

You also get two 3.5mm audio jacks, and there are two 3W speakers built-in if you want to disturb your co-workers with the latest viral videos. They won't do justice to music or movies, but they'll do just fine for watching the news or listening to conference calls.

The ViewSonic VG2860mhl-4K is a good Ultra HD office monitor with a practical design and lots of inputs. Its slightly patchy backlight can be forgiven, considering its sub-450 price. If you're not looking for the height of colour accuracy but are crying out for more desktop space, it's good value.