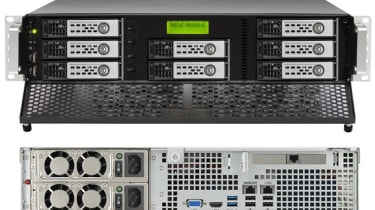 There's no shortage of choice for 10GbE-ready NAS appliances but few come equipped with an adapter as standard. Netgear set the ball rolling with its desktop ReadyNAS 716, which includes dual 10GBase-T ports in the price and now Thecus joins the club as its N8810U-G rack system sports a single-port 10GBase-T card.

Thecus uses the same chassis for all its 2U SMB appliances, which is solid despite its age. It provides 8 hot-swappable and lockable drive bays which can all be protected with a flip up grill.

A backlit LCD panel in the centre provides details on the status of arrays, drives, the network ports and IP addresses and the control pad alongside can be used for manual configuration. Two 400W hot-plug PSUs are included and whipping the lid off gives you access to the bank of four hot-plug fan modules.

The appliance uses a decent 2.9GHz dual-core Pentium G850 CPU partnered by 4GB of DDR3 with up to 32GB supported. 10GbE services are provided by Thecus' own C10GTR PCI-e card which can be swapped out for a dual-port version if you wish as it has certified fibre and copper 10GbE adapters from Intel and Emulex. 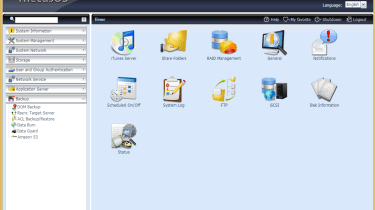 Port permutations are reasonable as the appliance provides 6 x USB 2, 2 x USB3 and a couple of embedded Gigabit ports. Physical expansion isn't possible as there are no extra SAS or eSATA ports for adding additional disk shelves.

Installation is swift although the web interface is in need of some graphical refreshment as it's now looking very dated and cumbersome. Even so, its quick start wizard makes light work of initial configuration and offers to set up a RAID array for you.

For testing, we slipped in a quartet of 4TB WD Enterprise SATA drives and plumped for a RAID-5 array. You can add extra drives as dedicated or global hot-spares, expand arrays into spare drives and migrate from RAID-5 to -6 as well.

The NAS Stacking feature goes some way to make up for the lack of expansion ports. It allows you to declare up to five iSCSI targets on other Thecus appliances to the N8810U-G which can then export them as network shares. 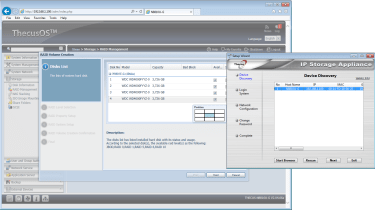 Thecus offers a selection of free apps which are implemented using modules available on its support site. Cloud backup and sync tools include DropBox plus ElephantDrive and we had no problems using the Amazon S3 cloud service where we created multiple backup schedules to different buckets.

If you're not prepared to get your hands dirty with FUSE coding then steer well clear of the Google Drive app. Why Thecus has to make it so complicated is beyond us especially when Synology's Cloud Sync package makes Google Drive integration so easy.

Other backup features include Rsync support and the Data Guard app for backing up shares, LUNs and folders locally or to a remote NAS appliance. A vintage copy of Acronis True Image Personal 2010 is provided for workstation backup but this stripped down version doesn't provide job scheduling, disk cloning or incremental backups.

The IP Cam surveillance module hasn't been updated for years and is now looking positively prehistoric. Motion detection and live viewing within the IP Cam interface are still not supported and all it can do is take scheduled snapshots every few seconds and store them in a share.

Local antivirus scanning is provided by a McAfee VirusScan module. You can run manual scans of selected folders, schedule them at daily or weekly intervals and quarantine suspect files in a separate folder. 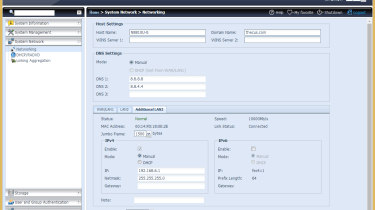 NAS speeds are good with Iometer reporting raw read and write rates for a mapped share of 860MB/sec and 350MB/sec. Real world speeds are nothing to sniff at either with drag and drop copies of our 50GB Iometer test file returning sustained read and write speeds of 257MB/sec and 243MB/sec.

IP SANs are easy to create and Thecus supports thin provisioning. Speed is another bonus with a 100GB target delivering raw Iometer read and write rates of 1035MB/sec and 444MB/sec. With a 4K request size we also saw a high 68,000 IOPS for sequential read operations. 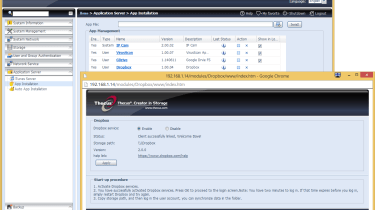 Thecus traditionally scores well for value and the N8810U-G is no exception with a diskless appliance costing a shade over 1,300. It's easy to install and performance over 10GbE is good but Thecus needs to do a lot more software development if it wants to beat the likes of Qnap and Synology for features.

The N8810U-G beats the 8-bay competition soundly for value and has the bonus of a 10GBase-T adapter card included in the price. It also performs well but falls short of storage features offered by Synology and Qnap.