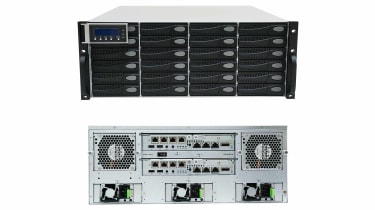 A work in progress

Qsan furnished us with its latest firmware upgrade which brings in a number of significant changes. First time setup is aided by a new app while QFinder discovers the appliance on the network and lists all available network ports along with their IP addresses.

File version controls extend to the Windows previous versions feature but support for SMB 3, FTP, AFP and WebDAV won't appear until the next major firmware release. The new cluster feature provides fault tolerant links for CIFS and NFS shares across two matching ports on each controller. It will support load balancing but this feature is also due in the next major update.

The redesigned web management interface is very welcome as it's a lot easier to use than the previous version. Just as well as Qsan's QCentral Java app also needs an update to support the new firmware.

The new web interface made light work of installation and for testing, we loaded up five 4TB WD SAS hard disks and created a RAID5 storage pool with hot-standby. Adding more drives allowed us to create multiple pools each with their own RAID array type or we could use them to expand the capacity of an existing pool.

For NAS shares, we enabled CIFS and could apply access controls using a local user and group list or Active Directory and LDAP. After creating our iSCSI targets, we mapped them to LUNs, applied CHAP authentication and decided which controllers and ports they would be visible on. 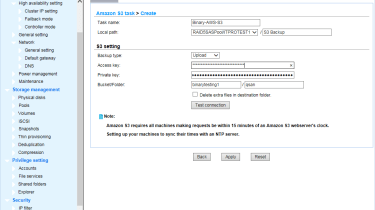