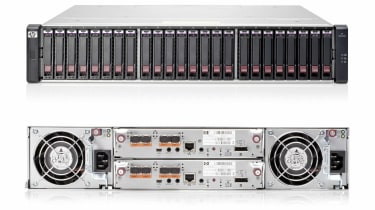 For testing, we used an HP ProLiant DL380 Gen9 server (web ID:23173) equipped with QLogic 8Gbps FC and Emulex 10GbE adapter cards. We found FC performance on the money with Iometer reporting raw sequential read and write speeds of 785MB/sec for a volume on the standard virtual tier.

IP SAN speeds were equally good with a 500GB target on the same tier delivering raw read and write speeds of 1,150MB/sec and 965MB/sec.

To test read cache performance, we ran a baseline Iometer test on a 750GB iSCSI target with a 90/10 random read/write spread which returned around 2,000 IOPS. We added a read cache disk group using two 200GB SSDs and saw the same test deliver near to 9,000 IOPS after a 90 minute warm up period.

Next, we deleted the read cache and used the same SSDs to create a virtual disk group which the MSA 2040 automatically classified as a performance tier. After leaving the same Iometer test running for an hour, we watched throughput rising swiftly to over 37,000 IOPS and could see from the console's performance page that all the I/O action had shifted onto the SSD-based tier.

It took us a while to get used to HP's new web console but found the data tiering features easy to configure as most of it is automated. Our speed tests show it's capable of boosting performance substantially and at a price the competition won't be able to match.

HP’s new virtualisation features make one of the best SMB storage arrays on the market even better. The MSA 2040 is easy to deploy and the automated data tiering features boost performance and lower storage costs