Synology has been busy developing its Value series of small business NAS appliances and the DS1515 is the first 5-bay desktop model to join the family. It's one of three appliances in this range to use an Annapurna Labs Alpine CPU which Amazon thought was so good it acquired the company earlier this year.

It's sold as a lower cost alternative to Synology's DS1515+ but is only around 48 less. In this review we put them both through their paces in the lab to tell you whether these savings are worth making.

While they both use almost identical solid matt-black metal casings, the DS1515 has two USB 3 ports half that of the DS1515+. The chassis employs two cooling fans at the back and during testing we found these to be very quiet making either model a good choice for SOHO environments.

Along with four Gigabit Ethernet ports, the DS1515 also has two eSATA ports which support Synology's DX213 2-bay and DX513 5-bay expansion units. With 8TB drives on the certified list, you can push raw capacity to an impressive 120TB. 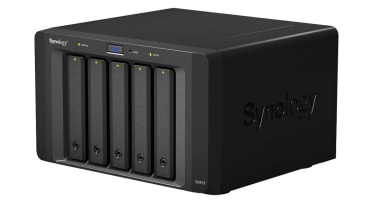 For testing, we loaded up a quartet of 4TB WD Red NAS hard disks. Synology's tool-free carriers simplify the process as we just removed the carrier side clips, dropped the disks in, reattached the side clips and slotted them back in.

With Synology's discovery web portal on the case, initial deployment is very swift. It found the appliance on the lab network, loaded the base DSM firmware, updated it to the latest version and had it ready to go inside 20 minutes.

From the Storage Manager app, we chose a single SHR (Synology Hybrid RAID) storage pool using all drives. You can opt for classic RAID arrays, but SHR is more flexible as it allows disks of different sizes to be mixed together without taking a hit on capacity and it supports single and dual-drive redundancy.

The DS1515 delivered some good results in our performance tests and can clearly cope with the demands of light to medium storage duties. Using a share mapped to a Windows Server 2012 R2 server, we saw drag and drop copies of a 25GB test file return sustained read and write speeds of 112MB/sec the same as the DS1515+.

It handled our backup test well with a 22.4GB test folder containing 10,500 small files copied down at an average of 83MB/sec. The DS1515+ achieved a slightly higher 87MB/sec for this test.

The Alpine processor has an integral AES-NI encryption engine but it's not as efficient as the Atom C2538. Copying our 25GB test file to an encrypted share on the DS1515 returned 63MB/sec whereas the DS1515+ mustered a higher 82MB/sec.

We increased the pressure by mapping shares to four Xeon E5-2600 servers each with dedicated Gigabit Ethernet links to the appliances. Running Iometer on each share saw cumulative read and write speeds for the DS1515 of 432MB/sec and 366MB/sec which improved noticeably to 452MB/sec and 430MB/sec for the DS1515+.

Whichever model you choose, you won't be lacking for software features as Synology's DSM is packed to the gills with them. Data protection tools are in abundance and we used the Backup & Replication app to secure data from one local share to another and externally to an Rsync compatible NAS appliance.

The same app supports backup to Amazon S3 and Microsoft Azure plus there's a separate one for Amazon Glacier which worked fine with our account. The Cloud Sync app has been updated so along with Dropbox, Google Drive and OneDrive, it now supports Amazon Cloud Drive and Google Cloud Storage.

Workstation backup is handled by the Cloud Station app which allowed our Windows desktop users to connect to the DS1515 using its QuickConnect ID and sync selected local folders with the appliance in real-time. The only data protection feature you won't see is BTRFS snapshots as this file system is only available on Synology's higher-end appliances such as the RS18016xs+. 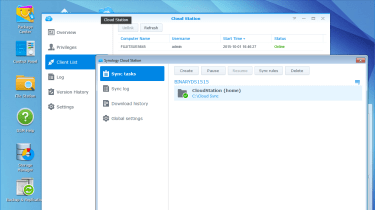 We tested the Cloud Station Client app and were able to sync data on the DS1515 in real-time with a paired folder on the lab's DS1813+. Both systems could also be centrally monitored from the DS1515 using Synology's CMS app which provides a handy console for viewing their status. 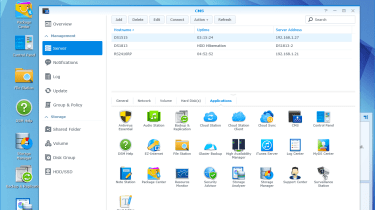 If you're planning on using encrypted shares and forecast a high storage workload such as multiple workstation backup and replication to other appliances then we recommend the higher-spec DS1515+. It's worth spending that little bit extra as it'll provide you with noticeably better performance.

Nevertheless, the affordable DS1515 is a tempting proposition for small businesses that want a low-cost network storage repository with room to grow. It runs the same DSM software as the DS1515+ so features and apps are equally impressive and it's just as well built.

The DS1515 is good value, well-built and packed with useful software features but the DS1515+ is better suited to heavy workloads and encryption duties