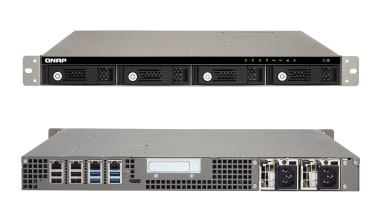 Competition in the SMB NAS market shows no signs of slowing down and Qnap ups the pressure with its first 10GbE-ready 1U rack appliance. On review is the TVS-471U-RP-i3-4G equipped with a speedy 3.5GHz Core i3-4150 CPU and 4GB of DDR3 memory which can be expanded to 32GB.

It has four Gigabit Ethernet ports plus dual redundant power supplies while its single PCI-Express x4 slot supports plenty of industry standard 10GbE adapters. Other configurations are available with the single PSU model around 100 cheaper and you can save even more by opting for the version with a 3.1GHz Pentium G3250 processor.

Either way, you'll have to make a decision about future 10GbE upgrades or storage expansion as you can't have both. The appliance supports eight 12- or 16-bay REXP disk shelves for a maximum capacity of over 1PB, but you'll need to fit Qnap's optional SAS-6G2E-U dual-port SAS expansion card. 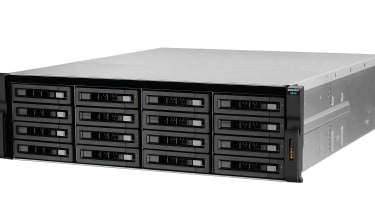 With Qnap's cloud portal on the case, deployment only took us a few minutes as we entered the unique cloud key on the label on the lid and left it to install the QTS firmware. For testing, we fitted four 2TB WD Enterprise SATA hard disks and used the QTS Storage Manager app to create a single RAID5 array.

We also upgraded the appliance to the latest QTS 4.2 RC firmware to get a taste of all the new features to come. This introduces snapshots for fast data protection and recovery. We selected the thin multiple volume' option during volume creation as this also supports thin provisioning.

Snapshots are supported on NAS volumes and iSCSI LUNs and can be taken on-demand or scheduled to run as often as every 5 minutes. Smart snapshot is a clever feature that saves storage space as it will only take the next snapshot if the data has changed since the last one. 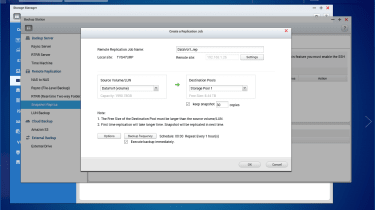 Recovery using the Snapshot Manager app is simple as it displays a list of all snapshots for the selected volume or LUN. The Revert option provides a full recovery of the target or we could view NAS share contents and restore individual files directly from the QTS console.

Upgrading the appliance with an Emulex OCE11102-NT dual-port 10GBase-T card took a while as 16 screws had to be removed to get the lid off and the expansion riser bracket out. With everything back in place, we powered up the appliance which correctly identified the card.

After a few minutes it was evident that cooling was an issue as the PSU and system fans started to ramp up and produce excessive noise levels. The system temperature rose to 40 degrees C and when we removed the lid, it fell to 28 degrees C within 60 seconds.

The 10GbE card sits right next to the CPU's big passive heatsink and we could see there isn't enough air flow round it to keep the card cool. The bottom line is that if you want 10GbE speeds then you'll have to deal with high operational noise levels.

That said, the appliance delivered impressive results in our 10GbE tests. With a share mapped to an HP ProLiant DL380 Gen9 rack server running Windows Server 2012 R2, we saw Iometer record a steady 9.1Gbits/sec for sequential read and write operations.

Real world performance was equally good with drag and drop copies of the 25GB Iometer test file returning read and write speeds of 412MB/sec and 352MB/sec. Backup operations won't be a problem either as our 22.4GB test folder and its 10,500 small files was copied to a share at 257MB/sec.

Qnap's Q'centre app allows multiple appliances to be centrally managed and monitored from a single console. We used its customisable dashboard to create views of the appliance with graphs of storage pool and volume usage plus appliance hardware utilisation. 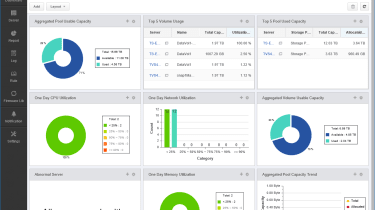 Q'centre provides a central management console for all your Qnap appliances

The updated File Manager app provides direct links to cloud storage and we used it to view our Dropbox and Google Drive accounts along with data stored on the appliance. Finding files was a cinch with the Qsirch app which provides text-based search facilities while Docker support allows you to host Linux apps in containers on the appliance.

Cloud backup doesn't get any better with support for all the big service providers including Amazon S3 and Glacier, Microsoft Azure and Google Cloud Storage. The new Cloud Drive Sync app handles file syncing with the likes of Dropbox and Google Drive, while another app let us back up our Gmail accounts directly to the appliance. 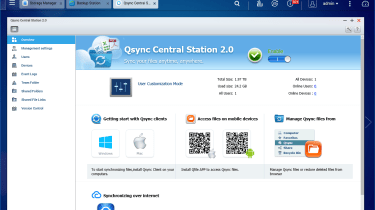 The TVS-471U-RP packs a lot of power into the smallest of rack spaces and Qnap's upcoming QTS 4.2 firmware is a real winner for storage features. It's inexpensive too, but its highly inefficient internal cooling design stops us well short of recommending it unconditionally.