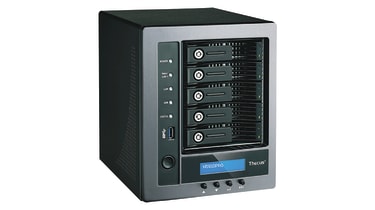 It looks like a standard five-bay desktop NAS appliance, but the N5810Pro Zero-Crash has a secret: a mini-UPS to protect your data in the event of a power failure.

It's powered by a slim lithium-ion battery pack that fits into a slot at the rear; we found it stored enough juice to keep the appliance and four hard disks ticking over for almost five minutes. Before the pack is exhausted, the appliance gracefully powers itself off, ensuring your RAID arrays, outstanding disk writes and firmware upgrade manoeuvres remain intact.

The N5810Pro runs on Intel's popular 2GHz Celeron J1900 CPU, and the base 4GB of DDR3 RAM can be bumped up to 8GB. The metal cover isn't easy to remove, though, and when replacing it we found the plastic lever behind the power button obstructed the chassis, having to be coaxed into place with a thin piece of wire poked through the side air grille.

Installation was swift. The Setup wizard utility found the appliance on our network right away, and another wizard in the web console helped us create a RAID5 array from four 4TB WD Red hard disks. We were offered a choice of file systems, and opted for the newly supported BTRFS, so we could play with its snapshot feature.

Whereas Netgear's ReadyNAS boxes support unlimited BTRFS snapshots, Thecus only lets you retain up to 16 versions. They're easy to create, however: we selected shared folders and were able to run them manually or apply a daily, weekly or monthly schedule.

To test recovery, we selected a snapshot from the share list and suspended the SMB service. The appliance restored all our deleted files in less than a minute. Recovery can also be delegated to users; snapshots can be exposed as network shares and files restored using drag-and-drop.

The only glitch was with iSCSI snapshots. Although the console informed us these had completed successfully, when we looked in the list there was nothing there. After we raised this with Thecus, a firmware upgrade was provided that resolved the issues, allowing us to snapshot and recover iSCSI targets seamlessly.

The appliance didn't disappoint for performance. Copying a 50GB test file to and from a network share, we saw average transfer rates of 112MB/sec and 109MB/sec. Our backup test folder, containing 10,500 small files, was also handled well, copying toa share at a speedy 88MB/sec.

With five Gigabit Ethernetports, the N5810Pro is well served for connectivity. To test its performance under pressure, we mapped dedicated shares to four different Windows Xeon E5-2600 servers, each connected to separate ports. Running Iometer on each one to measure raw read and write speeds, we saw cumulative rates of 452MB/sec and 410MB/sec.

Thecus supports real-time replication to other rsync-compatible appliances, so it can fit into all sorts of backup regimes. We tested this using the Data Guard app, which helped create scheduled backups to local storage, external USB devices and our Amazon S3 account.

Unfortunately, it supports few other cloud services: there are only apps for Dropbox and ElephantDrive. For Amazon Glacier, Google Drive, Box, Microsoft OneDrive and more plus local workstation cloud syncing features check out Synology or Qnap.

Thecus also bundles a five-user copy of Acronis True Image Personal 2010, which provides image-based workstation backup. It's so old, however, it should be in a museum. It also requires a paid-for upgrade to receive support for features such as incremental backups and job scheduling.

The N5810Pro is good value, but its design and features didn't impress. Even so, it delivers very good performance, and it's your only option if you want a NAS appliance with its own UPS.

The N5810Pro is good value, but its design and features didn’t impress. Even so, it delivers very good performance, and it’s your only option if you want a NAS appliance with its own UPS.