Good 10GbE performance and classy snapshot data protection, but the price is tough to swallow 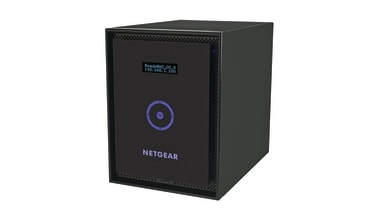 Small and medium-sized businesses concerned with data protection should check out the ReadyNAS 716X, which offers a five-point safety net. Along with support for Netgear's versatile X-RAID2 arrays, it adds real-time antivirus scanning and private cloud backup, mixes in copy-on- write data protection and tops it off with unlimited snapshots.

The 716X comes with 10GbE enabled out of the box and has not one, but two 10GBaseT ports, as well as dual Gigabit. There's room to grow, too, because you can use the three rear eSATA ports to connect Netgear's EDA500 five-bay expansion boxes, which are certified for 6TB drives.

Deployment takes minutes: Netgear's ReadyCloud web portal discovered our appliance and helped us set up a single X-RAID2 array using six 1TB SATA drives. Once it was registered to our ReadyCloud account, we could remotely manage it wherever we were.

Declaring users to ReadyCloud allowed them to remotely view, add or delete files and folders from the portal. They could also copy files to the appliance directly from their desktop by dragging them into the portal's Browse page.

Netgear was the first major NAS vendor to switch from EXT4 to Btfrs and its unlimited snapshots. You'll meet these during share or iSCSI LUN creation: there's a Continuous Protection checkbox where you request hourly, daily or weekly snapshots and leave the applianceto manage them.

Recovery options are another strong point. We made snapshots visible to users so they could restore their own files and we could recover files, directly from the web console. Snapshot rollback is extremely fast, enabling us to delete 22.4GB of data from a share, run a rollback from the latest snapshot and have everything back in only six seconds.

IP SAN performance was a mixed bag: Iometer reported raw read speeds of 1,114MB/sec, but only 532MB/ sec for writes. This became more noticeable with a dual 10GbE MPIO link as read speed nearly doubled to 2,135MB/sec, whereas writes only stepped up to 700MB/sec. We advise caution in dealing with Netgear's antivirus app, as its real-time scanner hurts performance. With it enabled, the backup test copy speed dropped by 44% to 141MB/sec.

The Anti-Virus Plus app providesa scheduler for regular out-of-hours scans on selected folders, but notethe real-time scanner must be enabled to use it. We circumvented this by declaring all folders as exempt from real-time scanning, althoughit's hardly an elegant solution.

Netgear does offer a surveillance app, but compared with Synology's version, it's short on features. That said, you can create simple recording schedules and tie in with the camera's own motion-detection triggers. No licences are included, however, and a four-pack licence costs around 140.

The Netgear ReadyNAS 716X is too expensive for our taste, especially given that a six-bay Qnap TVS-671 with dual-port 10GBaseT card would save us more than 800. General features aren't great either, although the unlimited snapshots and fast recovery both help claw back points - and it can't be faulted for NAS performance.

The Netgear ReadyNAS 716X is  too expensive for our taste, especially given that a six-bay Qnap TVS-671 with dual-port 10GBaseT card would save us more than £800. General features aren't great either, although the unlimited snapshots and fast recovery both help claw back  points - and it can't be faulted  for NAS performance.