It may be short on features, but this rack NAS appliance combines 10GbE-readiness with excellent value 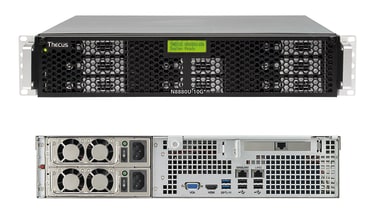 There are many reasons why storage-hungry SMBs will love Thecus' N8880U-10G, not least the uprated spec that gives this 2U rack NAS such a big performance boost. At this price, the inclusion of a 10GbE adapter makes it even more tempting.

Thecus' C10GTR single-port 10GBaseT card is bundled, saving you 158 exc VAT on the standalone price, while the drive itself has a pair of embedded Gigabit ports and dual 400W hotplug PSUs. Make no mistake: this is a very well-specified NAS device.

To reinforce this, Intel's 3.3GHz Core i3-2120 CPU sits in the driving seat, while the 8GB of DDR3 RAM can be expanded to 32GB. Eight hot-swap SATA drive bays lie waiting, but the lack of physical expansion ports means you can't increase this using extra disk shelves. However, the NAS stacking feature addresses external expansion capabilities in other ways, by making up to five iSCSI targets on other appliances available as network shares.

We tested the appliance with a quartet of 4TB WD Red drives, and used the Finder utility to discover it on our lab network. This provided direct access to its web console and quick-start wizard -- which we opted to skip for two reasons.

First, it offered us a RAID6 array, while we prefer the higher capacityof a RAID5 setup. Second, it defaults to the EXT4 file system, but we wanted to use the newly supported Btrfs: this brings in manual and scheduled snapshots for NAS folders and IP SAN targets.

Once it was up and running, the N8880U-10G certainly delivered the goods in our performance tests. With a direct 10GbE connection to an HP ProLiant DL380 Gen9 rack server running Windows Server 2012 R2, Iometer recorded raw sequential read and write speeds of 1,117MB/sec and 400MB/sec for a NAS share.

We saw similar real-world speeds, as our 25GB file-copy test returned sustained read and write results of 433MB/sec and 376MB/sec. It's no slouch for backup operations either, averaging a speed of 263MB/sec when copying a 22.4GB test folder containing 10,500 small files.

Unfortunately, the appliance's web interface shows how far Thecus has to go to catch up with rivals such as Synology and Qnap. Compared to Qnap's latest QTS 4.2 firmware in particular, it looks and feels in dire need of an update and falls well short on features.

All the key storage utilities are present, with the Data Guard app handling scheduled backups of shares, folders and LUNs (logical unit numbers). It can back up to local storage, external USB devices and remote appliances, and has an extra option for sending data to Amazon S3 cloud storage. You can't back up to Microsoft's Azure or Amazon's Glacier, but Thecus does provide apps for syncing selected folders with Dropbox and ElephantDrive cloud accounts.

Thecus supports up to 16 snapshots for each NAS share or iSCSI LUN, which can be taken on demand or scheduled for daily, weekly or monthly intervals. Recovery was a cinch in our tests, where we deleted files from a share and used the web console's recovery feature to restore the entire folder from the latest snapshot in less than a minute. Impressive stuff.

NAS snapshots can also be made available to authorised users as network shares, allowing them to recover individual files and folders using drag and drop in Windows Explorer. LUN snapshots are similarly simple to create and are restored directly from the web console.

Thecus is still undoubtedly playing catch-up with Synology and Qnap, at least as far as storage features are concerned. However, the N8880U-10G and its updated hardware package does put in a very good performance. SMBs that are after a basic 10GbE-enabled NAS and IP SAN storage appliance, but without the extra trimmings, won't get better value anywhere else.

SMBs that are after a basic 10GbE-enabled NAS and IP SAN storage appliance, but without the extra trimmings, won't get better value anywhere else.