This entry-level appliance combines triple-play storage features, great value and ease of use 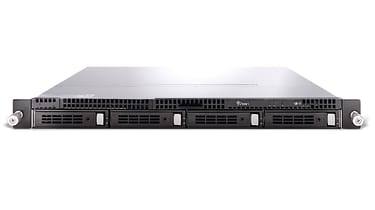 Qsan's TrioNAS U120 could be what small businesses looking for affordable network storage have been waiting for. It teams NAS and IP SAN service with cloud backup (hence the TrioNAS name) and delivers them all at a remarkable price.

You get extra storage goodies, too, courtesy of ZFS including thin provisioning, file and block-level snapshots, and remote replication. Deduplication and SSD caching sadly don't feature, as they're only available on Qsan's higher-end TrioNAS models.

There's a basic 1.86GHz Atom D2550 CPU at the appliance's core, working hand in hand with 4GB of non-upgradable DDR3 memory. This hardware team can cope with basic workloads, but it struggled under extreme pressure in our tests. You're still getting a lot for your money, though, as the TrioNASU120's asking price includes a pair of hotplug 226W PSUs. Compare that to Qnap's TVS-471U-RP, for example, which also comes with dual PSUs, but sets you back over 400 more.

It's swift to deploy, courtesy of the appliance's web console for direct management, or Qsan's QCentral Java utility, which handles multiple systems from the same interface. They are both very easy to use and, to perform our tests, we loaded up four 4TB WD Red NAS drives to create a single RAID5 storage pool.

For shares, we created ZFS file systems within our pool, added shared folders, and could then enable CIFS, NFS, AFP and FTP access on each one. We created volumes for both iSCSI targets and file-system shares, and could enable thin provisioning as required. Support for Amazon's S3 cloud service is built in, and we had no problems configuring scheduled jobs to back up selected folders on the appliance to our Amazon Web Services account. However, it's not possible to browse local folders, and there's no way of displaying existing bucket names, so you'll need to know these before creating a backup job.

Qsan provides on-appliance antivirus scanning, courtesy of a bundled a three-year McAfee subscription, which we used to run on-demand scans on selected volumes. Alternatively, you can opt to schedule them at hourly, daily or weekly intervals, if you prefer.

With a share mapped to an HP ProLiant DL380 Gen9 server running Windows Server 2012 R2, Iometer reported raw read and write rates of 111MB/sec and 109MB/sec in our tests. With a second share mappedto another Xeon E5-2600 v3 server, those results jumped to 202MB/sec and 130MB/sec.

Real-world speeds are lower: copying a 25GB test file returned more conservative read and write averages of 95MB/sec and 83MB/sec. To test general backup performance, we copied a 22.4GB folder to the Qsan share, and it averaged a throughput of 55MB/sec for the 10,500 small files it contained. When we ran the same test on Synology's RS815RP+, with its 2.4GHz Atom C2538, it achieved a superior 87MB/sec, but at a price: it costs around 300 more than the TrioNAS.

The IP SAN performance was reasonable, with Iometer reporting raw read and write speeds of 109MB/sec and 80MB/sec for a 1TB thin-provisioned target. When we upped the pressure with a dual-Gigabit MPIO link to the target, it returned 171MB/sec and 120MB/sec in the same test.

Qsan's snapshot technology, which employs the ZFS copy-on-write feature, makes short workof creating point-in-time backup. We tested this by taking on-demand snapshots of the file systems and volumes, and creating a range of schedules for hourly, daily and weekly snapshots.

We then deleted 22GB of data from a share before rolling it back using QCentral. Rollback is lightning quick: less than five seconds later, everything was back in place, as we proved by restoring it from the latest snapshot in less than five seconds. We didn't even have to unmap and remap the share and, usefully, the snapshots could also be cloned and mounted as new network resources.

The performance isn't earth-shattering, but the TrioNASU120 more than makes up for this with its extensive network storage services. It's easy to deploy and manage, is packed with data-protection features, and costs hundreds of pounds less than the competition.

The performance isn’t earth-shattering, but the TrioNAS U120 more than makes up for this with its extensive network storage services. It’s easy to deploy and manage, is packed with data-protection features, and costs hundreds of pounds less than the competition.