This affordable small business NAS has some growing pains 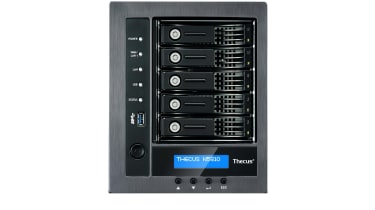 Thecus has a reputation for delivering affordable NAS appliances and it does so again with its latest NAS, the N5810. This 5-bay desktop box is endowed with a 2GHz J1900 Intel Celeron CPU and yet prices start at only 369 ex VAT nearly 50 less than Synology's DS1515.

The N5810 employs the same sturdy chassis as the N5810Pro, but minus the clever built-in little mini-UPS battery. Thecus has cut costs further by reducing the Gigabit Ethernet port count from five to two. 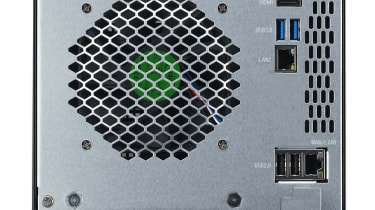 It includes 4GB of DDR3 memory, but we advise caution if you're planning on upgrading it. As we highlighted in our N5810Pro review, the appliance's cover is very tricky to remove and replace.

A new feature that will appeal to businesses looking for maximum uptime is Thecus System Failover which mirrors data to a secondary N5810 appliance. Thecus has also released an early beta of its ThecusOS 7 firmware. It's been a long time in the making and we tell you whether it's a worthy upgrade.

The N5810 was simple to install. The Setup Wizard quickly discovered it and installed the ThecusOS 5 production firmware. It also helped create a RAID5 array with our quartet of 4TB WD Red NAS Pro drives. 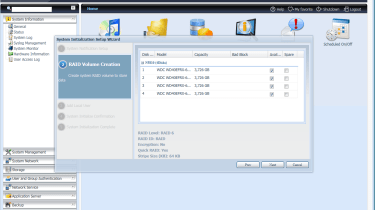 The ThecusOS 5 web interface is looking dated, but does provide quick access to all key storage features. We easily created NAS shares and dished out read and write privileges for local users.

IP SANs are equally pain-free as we selected a target size, applied CHAP authentication as required and chose from thin provisioning or instant allocation. The whole process is swift as LUN creation and target assignment are carried out automatically by the IP SAN wizard.

When creating RAID arrays, choose BTRFS as this brings Thecus' snapshots into play. The N5810 supports up to 16 snapshots for each share or iSCSI LUN and we could run them manually or schedule them at regular intervals.

Restoring entire shares is swift as we selected one from the list and had deleted data recovered in under a minute. Snapshots can also be presented as network shares to authorised users so they can restore individual files using drag and drop. 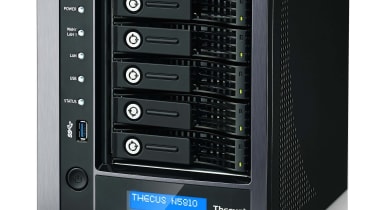 The N5810 is a good choice for data backup as copies of a 22.4GB folder containing 10,500 small files mustered a healthy 85MB/sec. We also tested maximum performance by mapping a share to another server connected to the second Gigabit Ethernet port and saw Iometer report cumulative read and write speeds of 224MB/sec and 192MB/sec.

IP SAN speed are good as well, with a 600GB target returning Iometer read and write speeds of 113MB/sec and 98MB/sec. On a dual MPIO link, speeds increased to 226MB/sec and 173MB/sec.

ThecusOS 7 should you upgrade now?

With the appliance upgraded to ThecusOS 7, we were initially impressed with the new Linux/OS X desktop-style web interface. It's similar to both Synology's and QNap's current operating systems and, compared to ThecusOS 5, is much easier to use with quick access icons on its desktop, a taskbar and a handy resource monitor. 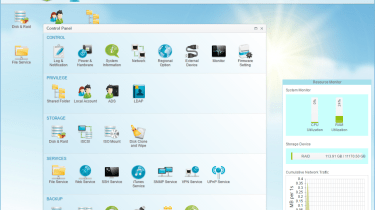 The Control Panel app provides links to all key features and there are desktop icons for disk and RAID settings as well as for file services and local user accounts. It also introduces SSD caching for improved performance but when we upgraded to the latest v3.00.03 firmware revision, we found Thecus had removed this feature as it could cause the system to become unstable'. 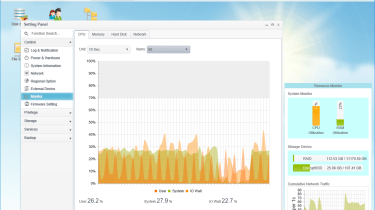 The new performance monitors are much more informative

The new App Center makes it easier to install apps for adding extra features to the N5810, but the selection is puny compared to those available for Qnap and Synology NAS devices. Many of the apps that are available feel half-baked or haven't been updated yet to work properly with ThecusOS 7 - the innovative' Google Drive app requires knowledge of FUSE coding to use and we found the preconfigured Dropbox app no longer worked.

Thecus' older Data Burn app for backing up files on the NAS to optical disc isn't supported by ThecusOS 7 beta. The Amazon S3 backup app didn't work either. We relayed this to Thecus, which confirmed that this app is also on its fix list. 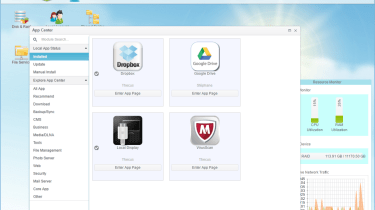 The ThecusOS 7 beta firmware is a step in the right direction as the new user interface is a big improvement. We don't recommend installing it on a live production appliance though, as it's far too flaky at the moment. The good news is that we were able to downgrade our appliance back to ThecusOS 5.

We had no problems with the current production firmware and although the N5810 lags behind Qnap and Synology for features, it delivers top NAS and IP SAN performance. The appliance is good value too, as you won't find a 5-bay business-class desktop NAS for less than this.

A good value 5-bay NAS appliance, but what you gain in cash you lose in features and the ThecusOS 7 beta firmware should not be used on a live, production appliance