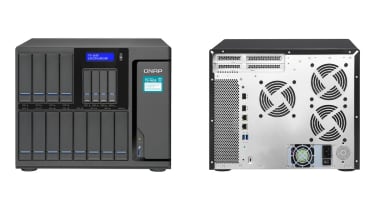 Heading up Qnap's mid-range SMB offerings, the TS-1635 puts more storage on your desktop than any other NAS appliance as this monster box has room for sixteen SATA drives. They're a cunning combination of 12 LFF and 4 SFF bays with the latter designed primarily to provide a high performance SSD caching facility.

The TS-1635 looks good value as the 4GB model costs around 963 ex VAT. We have the 8GB model on review which only costs about 90 more and both models can be upgraded to the maximum 16GB of DDR3 using SO-DIMM modules.

There's more on Qnap's agenda as the appliance's 1.7GHz Amazon Alpine-AL514 SoC (system on chip) has dual embedded 10-Gigabit (10GbE) SFP+ fibre ports. These are partnered by two Gigabit ports while the USB 3 ports can be used to expand capacity with Qnap's 5- and 8-bay desktop enclosures. 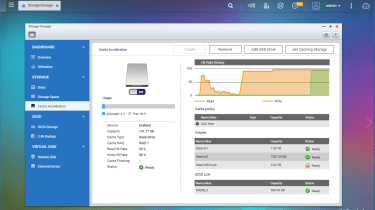 The appliance is well built and its three large cooling fans are very quiet. The internal speaker at the back issues verbal warnings and can also be used to play music via the Audio Station app but quality, as you'd expect, is very poor.

There may be four adapter card blanking plates at the back but the motherboard only has a single PCI-Express expansion slot. And being a Gen2 x2 variety, it supports Qnap's own single-port 10GbE cards but not Intel's and Emulex's dual-port 10GbE cards.

All the drive trays are tool-less so it only took a couple of minutes to slip in a triplet of 8TB Seagate NAS HDDs. We also added a couple of SATA SSDs for cache testing which clipped neatly into the SFF trays.

Qnap's QFinder app discovered the appliance on the network, loaded the latest QTS software and provided useful advice on the three types of storage pools available. We chose a RAID5 thin storage pool as we wanted to create multiple volumes with thin provisioning. 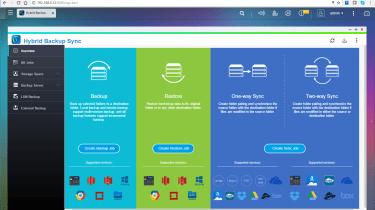