Considering it includes two 1TB drives, the price may be initially attractive, but there are better options 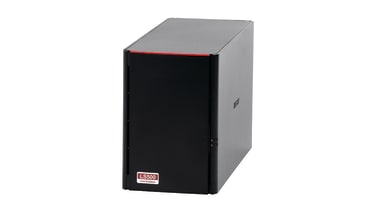 Buffalo supplies its compact two-bay consumer NAS populated, with a choice of dual 1TB, 2TB, 3TB and 4TB drives. Despite this, it's kept the price surprisingly low, meaning you can grab the 2TB version for the same price as some unpopulated two-bay rivals.

If you want to buy the entry-level version now and upgrade later, it's no problem - open the front-facing door and the two WD Green hard disks emerge neatly in their slide-out bays.

It's a shame that the software setup process isn't so easy, requiring you to visit Buffalo's website, download its NAS Navigator software, install it and then find your NAS before you can even get going.

If the tool seems dated, the firmware isn't much better, seemingly designed to resemble an old Linux desktop interface - complete with dry control panels that make everything from configuring DLNA media access to providing remote web access slightly awkward. The LS520 can handle all your backup, file-sharing and media vault duties, but other NAS devices make it easier.

In some respects, the features are fairly basic. There are file-management apps for iOS and Android, but nothing to match the Dropbox or OneDrive-like features of other NAS drives. At least safeguarding your files isn't a challenge, with NovaBackup bundled for PCs and full support for Time Machine. The remote-access features don't do anything more than provide access to the same desktop interface, and, as a DLNA server, the LS520 isn't exactly the snappiest around.

In fact, performance is the LS520's biggest issue. The combination of a 1.1GHz Realtek ARM Cortex A9 processor with just 256MB of RAM didn't make for stellar speeds - the LS520 could only manage read/write rates of 101MB/sec and 89MB/sec respectively with the larger video files, and a woeful 24.9MB/sec and 23.3MB/sec when churning through our smaller files - a sure sign that the CPU and RAM are struggling to keep up.

As a cheap, all-in-one solution the Buffalo may look tempting, but we'd advise plumping for the superior WD My Cloud Mirror 2. There isn't a 2GB version, only 4GB, but even at 260 inc VAT it's well worth the extra cash.

As a cheap, all-in-one solution the Buffalo may look tempting, but we'd advise plumping for the superior WD My Cloud Mirror 2. There isn't a 2GB version, only 4GB, but even at £260 inc VAT it's well worth the extra cash.