The price is as attractive as its design, but a lack of speed due to the lowly processor limits its appeal 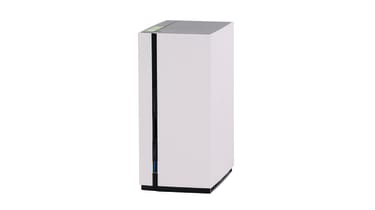 The Qnap TS-228 looks surprisingly stylish for a budget NAS, with two bays positioned vertically in the chassis, concealed by a sleek slide-off shell. Supplied barebones, the drives slide into place and are held in without screws by a pair of clips, but this thoughtful design is spoilt by one fact - the shell is an absolute nightmare to get back on. Once you do, this NAS is relatively quiet aside from the noise from the hard disks themselves, which tends to come through.

Things go much more smoothly with the software setup, where the combination of a web-based process and special codes attached to each individual NAS make it easy to get the Qnap running and configured as a RAID0 or RAID1 array.

Better still, the TS-228 uses the same versatile software as the more expensive TS-451+, giving you a huge range of first-party and third-party apps to install, plus a comprehensive range of monitoring tools and options. As a result, this budget NAS feels more like a mid-range model in everyday use.

That's good news for file-sharing and backup, where Windows users can use Qnap's own software while Mac users can work with Time Machine. Media streaming is no problem, either, whether you use Qnap's own Music, Photo and Video Station apps or a third-party option such as Plex.

You can use the Qsync app on your PC to synchronise a Dropbox-like folder across your NAS and other devices, or use Qnap's Android and iOS apps to access files and upload photos from your phone. It might be small, but the TS-228 is still big on features.

The one area where you will find compromises is performance. It's not horrendously slow, but the TS-228 is reliant on a basic 1.1GHz ARM v7 processor and just 1GB of RAM; its read speeds in our large video files test squeezed past 100MB/sec, but write speeds were stuck under 90MB/sec. Its performance with large volumes of small files is just below average for the Labs. Not disastrous, not great.

The Qnap TS-228 is still a great-value entry-level NAS, but you could do even better.

The Qnap TS-228 is still a great-value entry-level NAS, with smooth setup, strong file-sharing and good app support, but poor performance means you could do even better.