If you can look past its slow speeds, this is a charming NAS that’s a pleasure to both use and look at 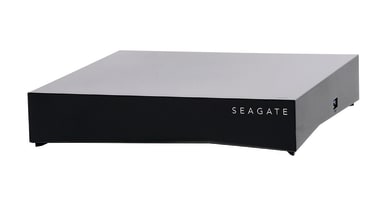 NAS drives are rarely accused of stylish design, but Seagate's Personal Cloud is an exception. The size and shape of a modern Blu-ray player, it could fit in the average home entertainment setup without looking out of place.

The downside is flexibility. It comes in single- or two-bay variants with drives preinstalled and no easy way to replace them. The software, meanwhile, focuses on ease of use over advanced features. If you plan to use a NAS as a low-cost, low-power server, it's not for you.

That doesn't make it a bad choice for everyone. Its web-based setup routine is close to foolproof, taking you through the selection of RAID0 or RAID1 configurations before asking what you want to do with your NAS - a smart, application-focused approach.

It's just as easy to create new users or set up backups, while the Sdrive feature works with a companion Windows app for drag-and-drop access to files and folders on the NAS, both on and away from the local network. Or you can sync folders with Google Drive, Dropbox and OneDrive.

There's support for Sonos, Chromecast, Apple TV and consoles, while Seagate has its own Media Channel for Roku devices. Mobile support could be better: the Seagate Media app for iOS and Android can access media files and documents on shared folders, but not in personal folders. At least it can auto-upload photos taken on your phone. This is a solid NAS for basic home file sharing and media streaming.

It is, however, a slow one, posting some of the worst write figures in our tests. Performance is even worse if you use Sdrive to copy rather than Windows 10's File Explorer. For the average home user, where wireless connectivity is a bigger bottleneck, this might not be an issue, but steer clear if speed is important.

While the Seagate Personal Cloud's sleek appearance and intuitive software may make attractive to home users, lacklustre performance and restrictive drive-swapping options may make it unsuitable for business users.