Proving that speed isn’t everything, this fast, powerful NAS is hobbled by ornery software 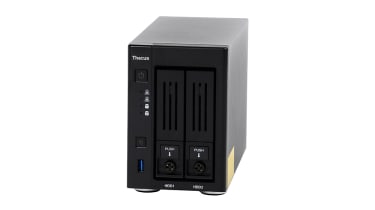 This two-bay NAS is definitely speedy. With a 1.6GHz Broadwell Celeron N2050 processor and a healthy 2GB of DDR3 RAM, the Thecus N2810 is one of the fastest units we've tested recently, beating the Qnap TS-451+ with an average write speed of 106.8MB/sec in our large video file transfer test and coming a close second for read speeds. Only a slightly-less-than-stellar effort in our small files transfer tests prevented it from topping the performance table.

Connectivity is another strength, with dual Gigabit Ethernet ports supporting link bonding, three USB 3 ports, with one handy at the front, and an HDMI output that enables the N2810 to double as a media player as well as server. With built-in transcoding abilities, it's certainly equipped for the job.

On other fronts, however, it's less than ideal. Like the TS-451+, the design is more functional than fancy, but the metallic chassis transmits more drive noise. The drives aren't so easy to fit, partly because the clip mechanism that holds them into their hot-swap caddies is awkward, and partly because the instructions don't cover installation.

The Thecus Setup Wizard used to locate your drive across the network is similarly basic, and by default put our unit on a separate network segment so that we couldn't see it from our workstation. Oddly, the RAID setup defaults to a JBOD configuration rather than the more conventional RAID0 or RAID1.

Things don't get much better once you get it up and running. Thecus provides a huge range of options for advanced users and a decent selection of add-on modules to download and install, but the control panels are complex, jargon-heavy and intimidating. It can be hard to understand the panels and the terminology being used, while even installing apps isn't hassle-free.

You can install the TwonkyMedia or Plex media servers or set up remote access through WebDAV and an accompanying mobile app but Thecus doesn't make the process easy, and setting up any sync service is even more challenging. This is a powerful NAS capable of handling high-end tasks and workloads, but Thecus needs to sort out the software.

The Thecus N2810 is incredibly speedy, but hampered by complex setup and an unwieldy, confusing UI. This is a powerful NAS capable of handling high-end tasks and workloads, but Thecus needs to sort out the software.