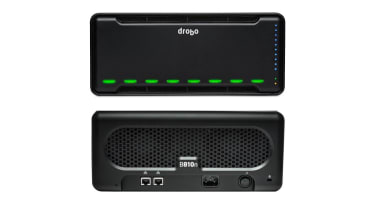 It's been nearly 10 years since Drobo launched its first NAS appliance and even now, its BeyondRAID technology is still unique. Aimed at users that don't want the hassle of configuring and managing RAID arrays, BeyondRAID is designed to automate everything.

On review is Drobo's B810n, an 8-bay desktop pure NAS appliance. Drobo still hasn't amalgamated IP SAN support into the product family and this is only offered in its dedicated B810i and B1200i appliances.

Drobo's mantra has always been to simplify RAID so you just slip SATA hard disks of any size or make into the appliance and stand back. BeyondRAID automatically adds them to a single virtual storage pool with redundancy configured at the block level.

Single and dual parity arrays are supported and you can swap between them on the fly. The array defaults to single parity but you can change to dual parity whenever you want and if you decide you can't take the hit on storage capacity, you can revert back to single parity. 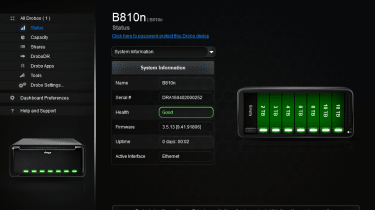 Considering the price, we expected to see a more appealing hardware specification as the B810n is powered by a simple 1.2GHz quad-core Marvell XP MV78460 CPU. This is teamed up with a modest 2GB of DDR3 memory, which can't be upgraded.

Physically, the B810n is an imposing matt-black metal box, which looks and feels very well built. It uses carrier-less bays so we just removed the front panel and pushed our hard disks in until the lever at the front locked them in place.

After an automatic firmware upgrade, the Dashboard presented a virtual storage pool with single drive redundancy all ready for action in 30 minutes. Our raw capacity was converted to 31.5TB of usable storage with 9.5TB used for protection. 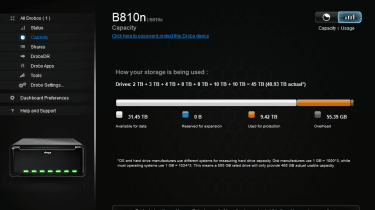 All configuration is carried out from the Dashboard and we had no problems creating shares, adding users and dishing out access privileges. Shares can be mapped using the appliance's IP address but loading the Dashboard on connected systems allows this to be achieved with two mouse clicks.

The Dashboard provides plenty of information about drive status, plus used and available capacity. Each drive carrier has a multi-colour status LED, and a light bar up the right-hand side shows used capacity.

Remote replication to another B810n is achieved using the built-in DroboDR feature. This replicates everything including user accounts and privileges to the remote unit, and recovery is achieved by taking the remote unit out of target mode.

The B810n can also run a range of extra apps including remote access, mobile photo backup and WordPress web site hosting. Private cloud storage and file syncing services are also available as the B810n can host the open-source ownCloud app. 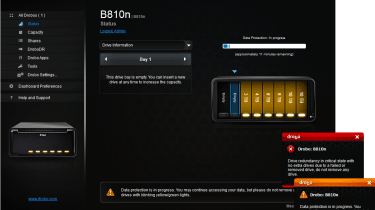