Most NAS drives will accept SSDs as well as mechanical hard drives - but is it a good idea? 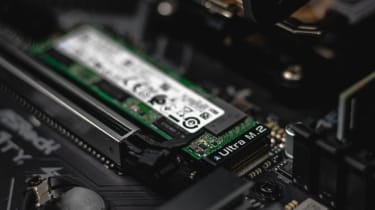 The majority of NAS drives will accept 2.5in drives, opening up the possibility of populating them with SSDs. But is this a good idea?

The main attraction of solid-state storage is its exceptional performance - but in this context that's largely moot. A gigabit Ethernet connection can only handle transfer speeds up to around 110MB/sec, so unless you're willing to spend serious cash on 10GbE hardware, you'll see no benefit from opting for faster SSD drives.

That's not to say the SSD route is completely without merit. We tested the Qnap TS-453B using four 2.5in SATA SSDs and saw a slight improvement in 4K read speeds - up from 10.4MB/sec to 11.4MB/sec.

And if you've ever sat next to a four-bay NAS appliance, you'll know that the combined noise of four mechanical hard disks can be quite distracting. Since SSDs have no moving parts, they run silent, so the only sound from your NAS will be the internal fan.

SSDs also use less power than mechanical disks. Our four-bay Qnap TS-453B, populated with four 1TB Seagate Barracuda 3.5in hard disks, drew 32W from the mains while sitting idle, and 38W while streaming video; switching to four SSDs saw this plummet to 14W idle and 16W while streaming. You'll see a similar drop regardless of which NAS enclosure you choose.

Previously, there was a major catch with SSDs - the cost compared to HDDs; a 1TB mechanical disk can be had for £40, so you can set up a 3TB RAID 5 array for £160. But SSDs have started to close the gap. While, just a year or two ago, a 1TB SSD will have set you back around £250, prices have started to drop, and you can pick one up for around £100.