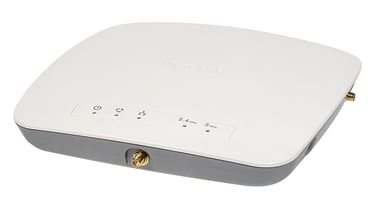 SMBs need secure, managed wireless networks just as much as enterprises but most don't have the time, money or expertise to deploy them. Netgear's new ProSafe WAC730 could be the answer for businesses that find themselves in this position, with this affordable access point (AP) offering a choice of four management methods.

Naturally, the WAC730 can be used in standalone mode, but Netgear's Ensemble mode means you can add it to a cluster of up to ten APs managed through a central web console.

For even larger wireless networks, you should turn to Netgear's ProSafe WC7600 and WC9500 central wireless controllers. There's also Netgear's Business Central cloud management portal, which bowled us over when we reviewed it in our sister title, Cloud Pro.

Ensembles must comprise the same AP model, but otherwise are simple enough to create. We gave our first AP a unique ensemble name and specified a "priority", where the one with the highest number becomes the master AP.

We gave the ensemble its own IP address, secured access with a passphrase and enabled auto-channel assignment. This allows the ensemble to adjust the channels used, based on real-time RF conditions. Moving to our second WAC730, we just entered the ensemble name and passphrase and it joined up with the master AP.

From the ensemble dashboard we saw that both APs were now members, and coloured pie charts displayed the percentage of clients connected to each one. The separate ensemble monitoring page showed further AP details, such as firmware versions, and listed each client along with the physical AP it was connected to.

Prior to configuring an ensemble, we wirelessly connected a Windows 10 desktop PC via a Netgear AC1200 adapter. Using a share mapped from a server on the LAN, Iometer reported very good read speeds of 40MB/sec at a 10m range and it never lost contact during ensemble creation.

Ensemble-wide firmware upgrades are simplified through the option to select any or all members and push a firmware file to them in one go. When you want to extend your wireless network, you only need to add a new AP to the ensemble and it will pick up all the central settings when it joins.

The WAC730 is full of business-class features and has simultaneous 3 x 3 MIMO 2.4GHz and 5GHz radios with 802.11ac Wave 1 support. Three dual-band aerials sit under the hood, and optional external aerials can be fitted to its three SMA connectors.

The Gigabit network port supports PoE and PoE+. Since Netgear expects most deployments to use this, it doesn't include a power adapter - the optional 12V power unit costs 12.

Build quality is excellent, and the AP's metal base is finned so it can act as a heatsink. The box includes a single bracket that you can use to wall-mount it, and it's also designed to give you the option to clip on to drop-ceiling rails.

Installation is a doddle thanks to the well-designed web interface. Our only complaint was its occasional sluggishness. The radios can be enabled or disabled individually and support up to eight SSIDs apiece - each with their own security profile.

These make the WAC730 very versatile, since profiles are used to apply an authentication scheme, mask or broadcast the SSID and assign it to a VLAN ID. The latter is useful for provisioning guest wireless access as it can keep them away from the LAN.

Profiles can also be used to enforce limits on upstream and downstream bandwidth, and we could apply quality of service (QoS) to selected security policies for identifying and prioritising voice and video traffic.

The WAC730 is a great choice for SMBs that want secure, simple and affordable wireless networks. Netgear's four management choices make it extremely versatile and we found the Ensemble mode takes the effort out of managing and extending the network.

The WAC730 is a great choice for SMBs that want secure, simple and affordable wireless networks. Netgear’s four management choices make it extremely versatile and we found the Ensemble mode takes the effort out of managing and extending the network.