A powerful and well-priced hard disk designed for NAS devices, but smaller capacities would be good to see 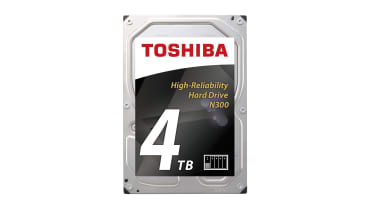 If you're buying more storage for your PC, the odds are that you're looking to upgrade with an SSD. However, the humble mechanical hard disk isn't dead yet. If you want a lot of storage at the best price, even the most keenly-priced SSD can't compete with a hard disk.

In particular, a hard disk makes a lot of sense for anyone looking to upgrade their NAS, most of which are designed with mechanical storage in mind. Enter the Toshiba N300 High-Reliability Hard Drive, which is designed specifically for NAS usage - putting it in competition with the similarly-focused WD Red series.

With any NAS, hard disk performance is important, but it's not everything. Typically speaking, the speed of your network has more of an impact in access times than the speed of the hard disk. Rather, it's disk size and reliability that are the most important aspects. Toshiba certainly has disk size well covered, with the entry-level drive weighing in at 4TB, and 6TB and 8TB models sitting above it. Clearly, this range of hard disks is designed for people who need a lot of storage.

Although you can use any hard disk in a NAS, the tight constraints of the devices typically mean that there's more heat and, thus, more chance of problems developing.

Toshiba has built in rotational vibration (RV) sensors to the drive, which is a feature more commonly found in enterprise-class hard disks. Inside an enclosure, particularly one with multiple drives, vibration can be a real problem - given the sensitive nature of hard disks and their small mechanical parts, vibration can cause damage. With an RV sensor, a drive can disperse vibration across its chassis, reducing the risk.

Heat sensors inside the drive can alter its seek time, helping to cool the drive. There can be a slight knock-on effect on performance, but increased reliability seems like a fair trade-off to us.

Given that NAS devices are typically left on 24-hours a day, 365 days a year, it's important that any drive can withstand this kind of usage. Each N300 drive is rated for delivering a workload of 180TB a year, which is around three times higher than on many consumer drives.

Spin speed is an important metric when determining a drive's performance. In simple terms, the faster a drive spins, the quicker data can be found and the faster it can be read. The WD Red series operates at around 5,400rpm, which is similar to a lot of laptop hard disks, whereas most desktop drives operate at 7,200rpm. It's good to see that Toshiba has managed to engineer better reliability without affecting spin speed, and the N300 runs at 7,200rpm.

The128MB cache is also double what you'd find on the WD Red drives. Increased cache helps improve performance, with data stored in fast memory before it's read or written to the physical platters.

To see how quick the N300 is, we put the 4TB version through our usual benchmarks. Using our file copy test, which uses Windows' file system, we found that the drive could read huge files at 205.15MB/s and write them at 326.77MB/s, with the latter score benefiting from the large buffer and Windows' own caching.

Switching to large files, we saw performance drop to 196.52MB/s for reading and 159.46MB/s for writing. Small file performance is usually the worst, as lots of small file operations require a lot of physical head movement. However, the N300 surprised us here, managing a read speed of 155.54MB/s and write speed of 145.48MB/s.

That's impressive performance, and the drive's large cache is clearly helping out. Performance-wise, the N300 comes out ahead of the WD Red, and while it proved to be slower than the WD Black (the performance desktop drive) for large files, the N300 was faster than the Black in our small files test.

For a real challenge, we used the CrystalDiskMark synthetic benchmark, which really pushes a drive to its limits. First, using the sequential test, which reads and writes data contiguously, the N300 managed a read speed of 208.4MB/s and write speed of 208.5MB/s. Switching to the 4K random test highlights how slow a mechanical hard disk can really be.

This test reads and writes data at random over the entire disk, requiring a lot of seeks, which mean physically moving heads. In this test, we saw read speeds of just 1.96MB/s and write speeds of 1.84MB/s. In reality, this test pushes a drive to its absolute limits, but software caching and normal workloads will rarely see a hard disk slow to these speeds in normal use.

If you want smaller capacity drives for a NAS (1TB or 2TB), then the WD Red range is the only option. However, if you want a lot of storage for your NAS, then the N300 is the quicker drive, and to top it off, a 4TB, 6TB or 8TB N300 is cheaper than the equivalent WD Red.