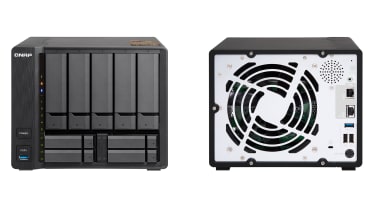 Targeting SMEs that want more from their NAS appliance, Qnap's TS-963X offers an innovative range of storage features at an affordable price. It delivers a combination of 5 LFF and 4 SFF bays with the latter designed to provide a high-performance SSD caching facility.

A standout feature is its 10GBase-T port as this also supports NBase-T multi-Gigabit speeds of 5GbE, 2.5GbE, 1GbE and 100Mbits/sec. The thinking here is to allow SMEs to step up to speeds greater than 1GbE without having to rip and replace their legacy Cat5e/Cat6 cabling.

On review is the 8GB version which costs 756 although you can save around 150 with the 2GB version. Either way, both models can be upgraded to a maximum of 16GB of DDR3L with a pair of 8GB SO-DIMM modules.

The TS-963X employs a 2GHz quad-core AMD G-Series GX-420MC SoC (system on chip) but multimedia services are off the table as it doesn't have embedded graphics. The 10GbE port is partnered by a standard Gigabit port while its USB 3 ports can be used to expand capacity with one of Qnap's UX-500P or UX-800P desktop enclosures. 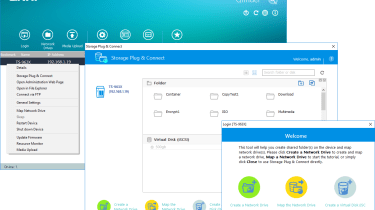 The QFinder Pro Windows app discovered the appliance on the lab network and directed us over to its web interface where a quick start wizard installed the latest QTS 4.3.4 software. We loaded up a quartet of 10TB Seagate IronWolf NAS drives in the tool-free carriers and left the wizard to create a big 28TB RAID5 array for us.

Qfinder offers many other useful features; its Storage Plug and Connect option streamlines mapping NAS shares or creating, discovering and connecting to iSCSI targets. It provides direct access to shares via Windows Explorer or an FTP session plus controls for remotely rebooting or powering off the appliance.

The QTS 4.3.4 web console hasn't changed much from previous versions so existing users won't have any problems. New users will find it equally easy to use, with all features accessible from the main window via chunky desktop icons.

QTS is brimming with data protection features and scores over most of the competition as Qnap's snapshot technology supports standard EXT4 file systems and doesn't require BTRFS. These are easily managed from the Storage & Snapshots app where we chose NAS shares and iSCSI LUNs, took snapshots on demand and scheduled them to run regularly from the Snapshot Manager.

Data recovery is just as easy as we could restore entire NAS shares and recover iSCSI LUNs from selected snapshots. Even better, NAS snapshots can be accessed directly from the File Station 5 app where you can browse them and restore individual files to their original location or other local or remote destinations.

The Hybrid Backup Sync app provides a central console for managing all your local, remote, cloud, Rsync and iSCSI LUN backups. Qnap's RTRR (real-time remote replication) is great for running off-site backups to remote Qnap appliances and can be used for one-way and two-way syncs between local and remote folders.

Workstations get in on the backup act too, as the Qsync Central app teams up with Qnap's Qsync Windows and Mac clients to provide real-time, two-way folder syncing. Other useful features include a team folder for sharing files between multiple users and the option to centrally manage and lock down client Qsync settings. 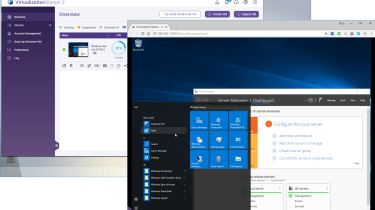 It was the same story for our real world tests, with copies of a 25GB test file returning average read and write speeds of 4.3Gbits/sec and 2.7Gbit/sec. Backups will also be slow as our 22.4GB folder with 10,500 small files was secured to the share at 1.4Gbits/sec. IP SAN speeds were in the same ball park with a 500GB iSCSI target delivering sequential Iometer read and write speeds of 5.9Gbits/sec and 4Gbits/sec.

SSD caching can make a difference and to test this, we installed a pair of 1TB Ortial MLC SSDs and created a mirrored read/write cache. With this assigned to our volumes, we saw Iometer read speeds for our NAS share increase to 6.2Gbits/sec and write rates jump significantly to 5Gbits/sec.

The TS-963X has sufficient memory capacity to handle Qnap's slick Virtualization Station 3 app, allowing it to host VMs running virtually any OS you want. We had no problems installing a Windows Server 2016 VM from a local ISO file inside 20 minutes.

The app provides direct VNC access for remote control and we could take on-demand snapshots of selected VMs. Snapshots can only be run manually but the app does provide a VM backup tool so they can be secured at regular intervals using a schedule.

The Linux Station app allows the TS-963X to run Ubuntu alongside QTS and we had it downloaded and installed in around 10 minutes. This app provides Ubuntu with direct access to all storage and shares on the appliance and provides VNC remote access via a web browser. And then there's Qnap's Container Station which runs a vast array of LXC and Docker apps in lightweight containers.

The TS-963X offers a great range of storage features and its mix of LFF and SFF drive bays makes it even more versatile. Overall 10GbE performance is underwhelming but if you want a well-featured NAS appliance that delivers multi-Gigabit speeds over your existing network cabling, the TS-963X is a worthy choice.