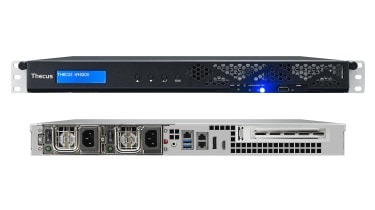 Thecus has a great reputation for value, and its NAS appliances are amongst the most affordable on the market. The N4820U-R is a prime example: this 4-bay slim-line rack NAS sports dual redundant power supplies and only costs 651 - Synology's RS818RP+ appliance will set you back around 320 more.

The appliance supports four SATA drives or SSDs and is certified for Seagate's 14TB IronWolf drives. Its 1.1GHz Intel Celeron N3450 CPU is hardly ground-breaking but to be fair, it is three years younger than the Atom C2538 Synology uses in its RS818RP+.

Memory starts with a 4GB stick of DDR3 which can be upgraded to 8GB using the motherboard's spare SO-DIMM slot. You also get three Gigabit, dual USB 3, one USB 2, DisplayPort and HDMI ports plus an audio line-out socket.

You can ignore the rear expansion bracket as the motherboard doesn't have a PCI-Express slot. That means 10-Gigabit upgrades are off the table and the appliance doesn't support external disk shelves either, so capacity can't be expanded outside the box. 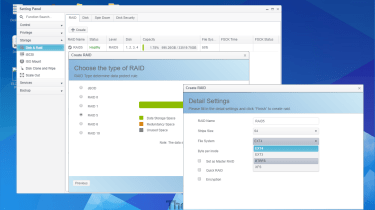 The N4820U-R is very well constructed with a sturdy steel chassis and lid. A flip-down panel covers the lockable drive carriers, and incorporates a backlit LCD panel and control pad for viewing system status and firing off quick copies of USB devices to a predefined shared folder.

Deployment is simple. The Thecus Setup Wizard discovered the appliance on our network and provided direct access to its web interface. For testing, we installed four 12TB Seagate IronWolf NAS drives and used the Disk & Raid app to create a big 32TB RAID5 array.

During array creation, we selected the BTRFS option as this brings NAS share and IP SAN snapshots into play. They can be run on-demand or scheduled at regular hourly, daily, weekly or monthly intervals, but you can only recover an entire snapshot - Qnap allows you browse NAS snapshot contents and choose a single file.

One issue that became immediately apparent is the appliance's four cooling fans are extremely noisy, with their default Auto setting emitting 66dB from one metre in front. You can change this setting to Low Speed but sound levels only dropped to 60.2dB making this appliance unsuitable for small offices without a sound-proofed cabinet. 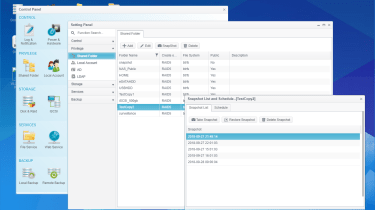 The Celeron CPU was up to the challenge of our performance tests, and it delivered quite respectable results. With a share mapped over Gigabit to a Dell PowerEdge T640 Xeon Scalable host running Windows Server 2016, we saw Iometer report top sequential read and write speeds of 113MB/sec and 112MB/sec.

We increased the pressure by mapping a second share to another Xeon Scalable Window server over a dedicated Gigabit link. With Iometer running on both hosts, we recorded cumulative read and write rates of 226MB/sec and 183MB/sec with the CPU peaking at 53% utilisation.

Real world speeds were on the money: our 25GB file copy averaged read and write rates of 113MB/sec and 111MB/sec. Thecus also handled our backup test well with a 22.4GB folder containing 10,500 small files secured to a share at 82MB/sec. 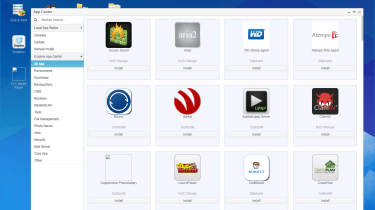 The integral backup app also supports Amazon S3 cloud accounts and after entering our access and secret keys, we chose a bucket as a destination and selected the files we wanted secured. Although the appliance's storage capacity can't be physically expanded, the Scale Out feature allows you to create larger volumes by combining RAID arrays from multiple Thecus appliances. 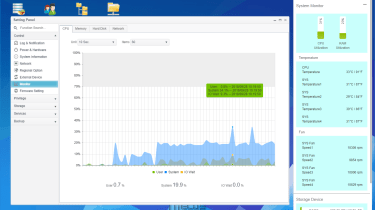 Thecus' app development has been painfully slow when compared to Qnap and Synology which seem to launch a new one every week. However, it has been gradually improving and they can be browsed and loaded directly from the App Center.

The IP camera surveillance app is now over 18 months old and looks it too. It auto-discovered our D-Link cameras and provided multiple viewing screens with recording facilities but if you want the best features, you should look to Synology as its Surveillance Station 8.2 app is simply outstanding.

Cloud syncing support is handled by apps for Dropbox, ElephantDrive and OneDrive. There is a Google Drive app, but it failed to load. Dropbox services are only available for local users and not the appliance's administrative account, and each one can only sync their home folder with a cloud account.

The N4820U-R is best suited to small businesses that want basic NAS and IP SAN storage services at an affordable price. The lack of 10GbE upgrades, minimal apps and noisy fans count against it but the Celeron CPU delivers a good performance and the dual redundant PSUs and 4GB of memory add even more value.