A versatile, high-capacity rack NAS that delivers the toughest data security at a very good price 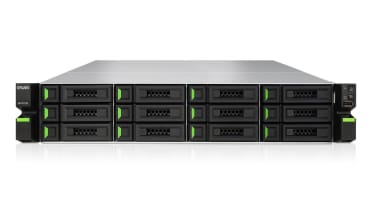 Qsan's XCubeNAS XN7012R offers an interesting alternative to mainstream NAS appliances, as it has a sharper focus on enterprise-class data protection features. These include ZFS copy-on-write, unlimited snapshots, self-encrypting drive (SED) support, AES 256-bit pool encryption plus WORM (write once read many) policies for selected NAS shares and you get integral data deduplication and real-time data tiering as well.

This 2U appliance has 18 storage bays, augmenting its front 12 hot-swap SATA bays with a rear cage that has room for 6 SFF drives with the last 2 supporting NVMe U.2 SSDs. All 6 can be used for performance enhancing read and write caches or as a read cache for the deduplication engine.

The XN7012R is offered as a more affordable alternative to Qsan's XN8012R - although the only difference between them is the former employs a dual-core 3.9GHz Core i3-7100 whereas the latter sports a quad-core 3.3GHz Intel Xeon E3-1225 v6. It is, however, enough to drop the starting price by over 800, and the XN7012R also supports up to 64GB of DDR4 memory.

At the rear you have quad Gigabit and USB 3 plus an HDMI port for connecting a monitor and accessing the system's BIOS. The two PCI-e slots only support Qsan's 10GbE, 40GbE, Thunderbolt 3 and dual-port SAS adapters and for testing, we installed its dual-port 10GbE fibre card.

Qsan's discovery portal found the appliance on our network and we allowed its wizard to load the latest QSM 3.1 software and create a RAID5 array using four 8TB Seagate NAS drives. A new feature is support for ZFS RAID-Z3, which offers triple-drive redundant storage pools for even greater protection.

To use data tiering, you must assign SSDs to your storage pool during creation. For general caching, SSDs can be added to a pool at any time and designated as read or write caches. 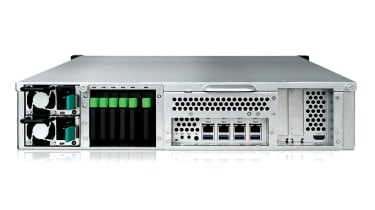 Snapshots are managed from the Backup app where we could select NAS shares and iSCSI LUNs, create schedules and replicate snapshots to remote Qsan appliances. Snapshots can be rolled back for instant recovery while NAS ones can be browsed for specific folders and files.

One of three WORM policies can be applied to shares where they protect existing data or files subsequently added. Data retention period are set in days - but be careful with the 'WORM forever' policy as share contents can never be modified or deleted and it will not permit the volume containing the share to be removed either.

App choices may be basic but Qsan includes ones for antivirus, MariaDB SQL and web services plus file syncing with Dropbox, Google Drive and OneDrive. You can virtualize other OSes with Hypervisor Manager - although the dual-core CPU will limit the number you can run.

Qsan's app list may be shorter than most but its XCubeNAS XN7012R delivers a high-capacity network storage solution at a very reasonable price. Speed and expansion potential are equally impressive while its wealth of data security measures are a cut above the rest.

Qsan’s app list may be shorter than most but its XCubeNAS XN7012R delivers a high-capacity network storage solution at a very reasonable price. Speed and expansion potential are equally impressive while its wealth of data security measures are a cut above the rest.