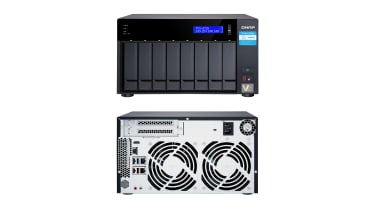 Qnap's TVS-872N 8-bay desktop NAS appliance aims to capitalize on growing business requirements for network speeds greater than Gigabit. As its first appliance to sport a quad-speed 5GBase-T port, the TVS-872N offers up to a five-fold speed boost over legacy Cat5e/6 cabling.

With increased bandwidth demand driven by key technologies such as high-performance servers and the latest WiFi 6 wireless access points, many SMEs are in a bind. Even now, a large percentage still have an old Cat5e/6 wiring infrastructure and stepping up to 10-Gigabit (10GbE) will require an expensive and time-consuming cabling upgrade.

Multi-Gigabit devices aim to provide a cost-effective solution as they can deliver speeds of Gigabit, 2.5GbE and 5GbE over older network cabling. The multi-Gigabit port on the TVS-872N supports all these speeds, allowing it to improve access to network storage and file sharing services.

To realise the full potential of the appliance's high-speed port, you'll need a multi-Gigabit switch that supports 2.5GbE and 5GbE operations. You can't plug it into a standard 1/10GbE switch as it will simply fall back to Gigabit.

Many network switch vendors have been slow to latch on to the multi-Gigabit bandwagon and SMEs will find there are very few affordable options available. Fortunately, Netgear isn't one of them and for our performance testing, we chose its ProSafe MS510TX which supports all multi-Gigabit speeds. 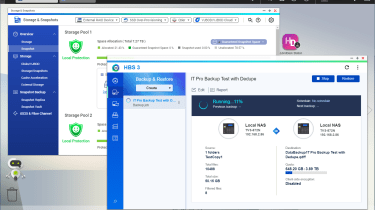 To test multi-Gigabit performance, we called up the lab's Dell PowerEdge T640 tower server and connected it directly to the switch's 10GBase-T port. Over on the TVS-872N, we installed four 16TB Seagate IronWolf NAS drives and used Qnap's QTS quick start wizard to create a 44TB RAID5 storage pool.

With the appliance connected to a 5GbE switch port and a NAS share mapped to the server, we recorded Iometer sequential read and write rates both of 4.6Gbits/sec. Swapping the appliance to a 2.5GbE port saw speeds settle at 2.3Gbits/sec.

IP SAN performance is up there too, with a 500GB iSCSI target delivering Iometer read and write rates over 5GbE of 4.6Gbits/sec and 4.5Gbits/sec. Swapping to a 2.5GbE connection saw speeds hold steady at 2.3Gbits/sec.

With Qnap's latest QTS 4.4.1 software at the helm, the TVS-872N delivers a wealth of data protection features. Qnap's Storage & Snapshots app scores over the competition as it can run manual and scheduled snapshots of NAS shares plus iSCSI LUNs and is the only solution that supports EXT4 volumes. 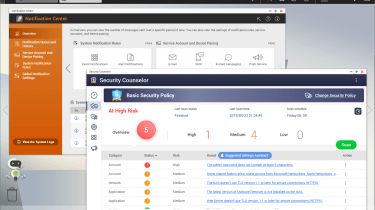 The Hybrid Backup Sync (HBS) 3 app presents a single console for managing all your local, remote, rsync, RTRR (real-time remote replication) and iSCSI LUN backups. It uses Storage Spaces to define multiple backup destinations and after choosing your source data, you can create a backup strategy in four clicks and enable file version management for added protection against ransomware attacks.

Qnap's QuDedupe feature reduces backup space requirements by performing deduplication and storing the reduced data set and hash tables as proprietary .qdff files at the destination. We found it capable of making substantial reductions, but recovery can be a chore as the file must be downloaded to a client with the QuDedup Extract Tool installed and data extracted locally -- you can't simply point the tool at a network location.

Creating a private backup cloud is a cinch with the Qsync Central Station 3 app, however. You can use this to sync folders and files on Windows and Mac systems along with iOS and Android mobiles, centrally manage client settings and create team folders to share files between multiple users.

Virtualization options are extensive as the TVS-872N can run the Linux Station, Container Station and the slick Virtualization Station 3 which allows the appliance to host VMs running virtually any OS you want. Other valuable business apps include the Security Counselor app which scans the appliance and advises on potential security issues, while the Notification Center provides a central platform for managing all email, SMS, IM and mobile push status alerts.

The 3.1GHz Core i3-8100T CPU features an embedded Intel 630 UHD graphics chip which can send 4K video to the appliance's rear HDMI 2.0 port. Connect a USB mouse and keyboard plus an HD TV to the HDMI port and you can use the HybridDesk Station and associated apps to view your movie, music and photo collections.

The TVS-872N delivers great multi-Gigabit performance but with a price tag of over 1,400, you are paying a premium for its 5GBase-T port and you'll also need to factor in the cost of a multi-Gigabit switch. That said, it is offering a much cheaper performance boost than upgrading your network to support 10GbE and Qnap's QTS software delivers a superb range of storage services.