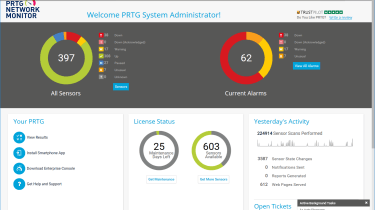 SMBs that want all their costs up front will like Paessler's PRTG Network Monitor a lot as it's licensed purely on the number of active sensors. Many competing products use a modular approach which can leave you with a mounting bill for optional extras.

There are no restrictions on what you can monitor either as the latest PRTG 17.4 offers no less than 245 sensors. These allow PRTG to monitor anything from servers, switches, routers and NAS appliances to Hyper-V and VMware hosts plus a vast array of popular cloud services, apps and storage providers - there are even ones to check on Windows Update and Defender.

PRTG only took 20 minutes to install on our Windows 7 host which already had the required .NET 4.7 loaded. Paessler would prefer larger sites to use Windows Server 2012 R2 to run the PRTG core server but during testing on a network with some 50 devices, we had no problems with our choice of host.

PRTG v17.4 shows off a freshly designed web interface where its home page is more informative than its predecessor. It presents a complete overview of all sensors and alerts with quick links to them, although we think Paessler is pushing its luck by placing a permanent link at the top for you to write a glowing review on the Trustpilot web site.

Our first network discovery was deftly handled by a wizard and within 35 minutes, PRTG had found all our lab systems. It automatically added sensors for every entity it discovered and at this early stage we could see just how quickly they can get used up.

Our 48-port HP switch was assigned 66 sensors for its interfaces, CPU, memory, OS and internal web server while our Hyper-V host received 35 sensors for its hardware, OS and all active VMs. However, it's easy enough to review and delete those you don't want so they're returned to the licensing pool for other devices.

The PRTG web console keeps your systems neatly organised with hierarchical groupings. You can manually move systems to other groups and each one inherits settings such as login credentials and discovery schedules from the parent group or can have their own settings.

Colour coded sensors make it very easy to see which are up, down, paused or in a warning state. Sensor states and threshold triggers are used to issue email, SNMP trap, SMS or Syslog notifications and are given pre-set values when they are first assigned to a device.

The sensor page can get busy but the new design has made it tidier and easier to interpret. PRTG provides pre-set views so we could take a quick glance at the top ten sensors for uptime, downtime or CPU usage, the fastest web site responses, available disk space and more.

Paessler beats the rest for mobile integration as its iOS app is very informative. We accessed the core server remotely from our iPad, viewed all the same details as available in the web console and enabled push notifications to receive PRTG alerts.

New sensors are provided for Dell systems which we tested on a PowerEdge R640 server. Once we'd installed the requisite Dell OpenManage Server Administrator, we added these sensors and monitored the server's storage and system health including its power supplies, battery, cooling and chassis intrusion status.

Paessler's PRTG is a great choice for SMBs as it presents everything they need to know about their network in a well-designed and intuitive console. It's excellent value too, with a 500 sensor license and a one year maintenance contract costing a shade over a grand.

Paessler’s PRTG is a great choice for SMBs as it presents everything they need to know about their network in a well-designed and intuitive console. It’s excellent value too, with a 500 sensor license and a one year maintenance contract costing a shade over a grand.