Remote Scottish community to get the fastest UK broadband 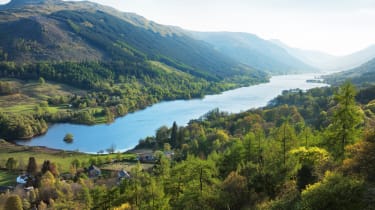 Scotland's Stirling Council has revealed an ambitious project to deliver some of the UK's fastest broadband speeds available to the small rural community of Balquhidder.

The Council has collaborated with ISP Bogons and community interest company Balquhidder Community Broadband (BCB) on the project, which will see the rollout of hyper-fast broadband to the community of 197 homes and businesses.

The three parties have together built a community network with local volunteers building trenches for the fibre network to be installed, as well as laying fibre to connect up to Bogons' network. Homes and businesses in the area will be able to access speeds of up to 1Gbps - faster than the majority of internet connections around the nation.

"This project is hugely significant," David Johnston, a director at BCB said. "Residential homes and businesses, some of which currently have no broadband, will be able to cancel existing poor copper to the premise broadband and line rental contracts and enjoy world class' service, for less than most are currently paying.

"This has been a genuine collaboration between local businesses, local government and local people and our commercial partner Bogons, to lay the foundations for broadband connectivity in Balquhidder on a par with the rest of the world."

The project has been part-funded by a 100,000 cash-injection by Stirling Council and a similar amount from its commercial partner, plus rural development funding from the Scottish LEADER programme, the project will not only offer residents and businesses access to super-powered internet, but it will also create more jobs in the local area and generate extra income for local businesses.

"Access to high speed broadband and connectivity is a major issue for communities in rural Stirling, impacting on economic growth and access to services," Stirling Council's finance and economy chair councillor Margaret Brisley added. "The Balquhidder Community Broadband Project is an excellent example of a community providing a solution to this challenge, supported by Stirling Council and private sector partners.

"The council recognises the leadership and commitment shown by the community and is delighted to work in partnership to deliver this project. Providing world class broadband connectivity to Balquhidder will be transformational, enabling and supporting the economic growth of the area whilst giving the community full access to services.

"Bogons is now appealing for more communities to come forward so it can grow its network across Scotland and other areas of the country that may not already have the infrastructure for hyper-fast (1Gbps or above) broadband.

"We are looking to help other communities where the community is willing to do the digging and other works for us to install fibre A DIY dig saves the community a significant part of the install cost where any fibre, even fibre to the cabinet, has not previously been available," Brandon Butterworth, a director of Bogons said.

It's the latest initiative to help close some of the UK's so-called "not-spots", areas that are still unable to access basic broadband speeds or, in some cases, not at all. EE recently announced its mini 4G router package capable of providing 100Mbps to those areas outside of broadband infrastructure by using an antenna fixed to the side of a property.