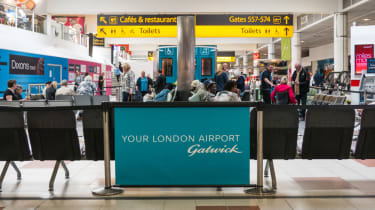 Commuters were left bewildered today after an outage took the video departure boards at Gatwick airport offline, forcing airport staff to write departure information on a whiteboard by hand.

The outage was caused by a damaged Vodafone fibre optic cable which provided internet access to the departure boards, as well as other back-office systems like email. A Gatwick spokesman told IT Pro that the damage, which has now been repaired, had a limited impact on the airport's systems, and that the departure boards were the only customer-facing system affected.

The unexpected outage caused consternation in the departure lounge, as crowds of people clustered around a whiteboard that was being manually updated by beleaguered staff. Airport management also resorted to using Microsoft Word documents displayed on digital signage, according to one account.

The mishap also drew derision from social media users, who criticised Gatwick's seeming inability to find a technical solution to the problem and accused the airport of having no backups in place.

@Gatwick_Airport where on earth is your #disastermanagement recovery plan? Using a white board is amateur hour!

The incident demonstrates the importance of having failover networks and redundancies in place, and serves as a reminder that supplier-side issues can often be an unexpected problem for businesses.

Before the faulty cable was repaired, a Gatwick spokesman told IT Pro that the airport was working on technical mitigations for the issue, but stated that there was no redundancy in place to cope with an outage of this nature. He confirmed that there were resiliency systems in place to protect the airport's more critical systems, however.

He also emphasised that despite the issue, only "a handful" of people missed their flights, with numbers in the low dozens.