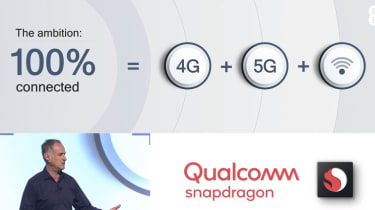 Qualcomm has announced its latest flagship processor, the Snapdragon 855, which will bring 5G connectivity to the next wave of flagship Android phones.

The announcement which was met with little surprise, comes almost exactly a year after it announced its previous flagship processor, the 845, at the same Snapdragon Technology Summit conference.

Among many other features that the system-on-a-chip (SoC) will provide, the one everyone's is interested in is its 5G integration. Demonstrated in Qualcomm's reference model 5G phone, the chip promises to support "multi-gigabit" download speeds over the new advanced networks, notably the millimetre wave New Radio (mmWave NR) standard and with spectrum on the sub-6Ghz level.

Details of performance boosts have been largely kept under wraps however, it did say the chip will provide "up to three times the AI performance compared to the previous generation mobile platform". More details are expected to be announced, however, we can presume that face-recognition in cameras will become faster and more accurate, thanks to the integration of computer vision technology into the chip's image signal processor, and battery management is also likely to see some optimisation.

Snapdragon Elite Gaming is a term given to a number of new features that will, yes, make mobile gaming much more enjoyable, including upgrades to augmented reality experiences but it hasn't dropped too many hints around what this truly entails, though it will involve working more closely with software developers to aid processor and GPU optimisation.

Cleaning fingerprint sensors after only a few uses will also be a thing of the past thanks to the Snapdragon 855's support for ultrasonic fingerprint sensors which the chipmaker claims to be the "only mobile solution that can accurately detect fingerprints through numerous contaminants".

But, as mentioned earlier, 5G will is the main selling point of the chipset, with Qualcomm noting the first flagship 5G-capable smartphone will debut in the US, with Samsung creating it. Such a phone is highly likely to be the Galaxy S10, set to be revealed early next year.

While 5G has been somewhat hyped-up for the past five years or so, it is now looking to become a reality, with major rollouts expected in the UK from the start of 2019 onward.

The UK's largest mobile network EE has announced a serious commitment to bringing 5G to the UK after initial testing of the technology in East London trial sites. While there are some obstacles to overcome before the large-scale rollout of 5G such as the strengthening of roof sites for the 50kg 5G antennas, by the end of 2019 the carrier aims to have launched 5G in 16 UK cities, starting with major and capital cities.