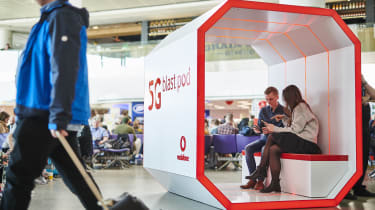 Vodafone has launched the UK's first consumer-ready 5G network at Manchester airport, with other locations set to be made available within weeks.

Vodafone's 5G masts have now been installed and allow travellers passing through the airport to connect to the network via Vodafone's 'Gigacube' device, which acts as a portable 5G modem to which current device can connect.

The network is just a taste of what full 5G could be like in the UK as the network only supports Sub-6 5G on a 3.4GHz, a slower form of the mmWave spectrum which will be the pinnacle of the exciting new mobile network.

Despite being a slower version, the network still achieved impressive speeds during tests, allowing travellers to download NOW TV box sets up to 4 times faster than was available over 4G.

Vodafone said that other travel locations will be starting to support the same network throughout 2019 with a second site set to be active within weeks.

Another similar trial to that in Manchester will be taking place at Snow Hill train station in Birmingham in the coming weeks.

"We all love to catch up on our favourite TV shows, play games or finish off some work when travelling. 5G, with its fast speeds and quick response times, will make that quick and easy, even in busy locations," said Nick Jeffery, CEO at Vodafone UK. "We are proud to be the first provider to bring 5G to an airport and will be adding more major travel hotspots to our 5G network throughout the year."

"We are delighted to support Vodafone's 5G trial at Manchester Airport. As we progress with the design and delivery of our 1bn transformation programme, we are constantly exploring how new innovations and technology can be applied to improve the airport experience, said Brad Miller, COO at Manchester Airport.

"As a business with a strong presence in our surrounding community, Vodafone was a natural partner for a trial project like this and we look forward to collaborating with them again in the future."

To truly access 5G on the go, users would need a 5G-enabled device, something which has yet to be made widely available. Motorola's Moto Z3 can access 5G spectrum but only with a snap-on mod for the phone.

Devices that support 5G connectivity are expected to be released at next week's Mobile World Congress in Barcelona.