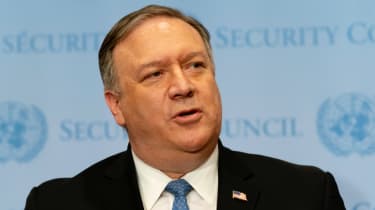 US Secretary of State Mike Pompeo urged the UK to consider ally relationships when making a formal decision on including Huawei technology on the nation's 5G infrastructure.

Speaking in London yesterday, Pompeo was keen to reiterate the stance taken by the US on the alleged threat presented by the Chinese telecoms equipment vendor, taking the angle that it's not just the UK's security that's at risk if Huawei is included.

Pompeo said the US has "made its views [on Huawei's potential inclusion] well known" and the US has already threatened to cease its intelligence sharing with the UK should Huawei be officially chosen as an infrastructure partner in any capacity, according to the BBC.

Foreign Secretary Jeremy Hunt was quick to insist that the UK would never "compromise" its position with the US on matters of intelligence sharing.

Hunt said that the UK is still weighing up its options and "considering the evidence" before making any formal decisions on the matter.

Information leaked last week from the top-secret National Security Council suggested that Prime Minister Theresa May had already made a decision regarding Huawei and that the vendor would be allowed partial access to the nation's non-core 5G infrastructure.

The leak was allegedly made by former Defence Secretary Gavin Williamson who was later sacked for the alleged offence. Leaking discussions from the National Security Council is a serious action as all members are made to sign the Official Secrets Act - breaking it can lead to a two-year prison sentence.

Williamson has reportedly escaped jail time as the information leaked was of too little importance to warrant a criminal conviction.

In separate talks, Culture Secretary Jeremy Wright said that the security concerns around Huawei's involvement in 5G infrastructure could result in a delay to the 5G rollout, which is curious considering EE announced today that 5G will be launching in six UK cities "imminently".

"There is certainly the possibility of a delay in the process of the rollout of 5G: If you want to do 5G fastest then you do that without any consideration for security," Wright told lawmakers. "But we not prepared to do that. So I don't exclude the possibility that there will be some delay."

Wright couldn't confirm when the report into the concerns surrounding network security will be made public, but added that it would "not be too long from now".

For those who haven't been following the saga, Huawei is a Chinese telecoms equipment provider that has come under fire from the US and the wider world because many nations deem the company's equipment to be a security risk.

The US and Australia have issued a nationwide outright ban on using the company's equipment and other European countries, much like the UK, are taking their time to review the situation carefully.

The company has or will, allegedly, install backdoors in its equipment that will facilitate state-sponsored Chinese cyber espionage campaigns on other nations.