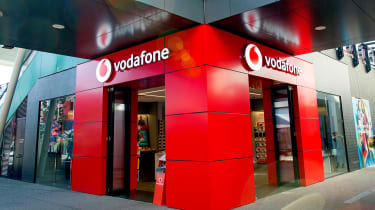 Vodafone has become the first carrier in the UK to set a concrete date for its 5G network switch on which will be 3 July.

The network will go one better than EE, the previous frontrunner in the 5G rollout race, by launching the network in seven cities initially rather than EE's six cities.

Birmingham, Bristol, Cardiff, Glasgow, Manchester, Liverpool and London will be among the first cities in the world to receive 5G with 12 other cities including Bournemouth, Reading and Southampton getting a taste of the new super-speedy network later this year.

Perhaps the biggest question on the lips of 5G fans is of how much it will cost. Marc Allera, CEO at EE said at MWC 2019 that EE's 5G network would be slightly pricier than its 4G one, but "no more than a few cups of coffee".

Vodafone has said that its 5G network will come at no extra cost to both consumer and enterprise customers, although you'll need a 5G-enabled device such as a smartphone or 5G router to make use of the network on launch. Price plans are expected to be unveiled next week.

If you don't own one of the very few 5G-enabled smartphones that are out or due to be released prior to switch-on, then Vodafone will also offer a 5G router for use in the home and office to give customers without a fixed line connection high-speed broadband access, the company said.

"It is also ideal for those customers replacing their home or business broadband; needing a second connection; or who require instant Internet access at an outdoor event," explained Vodafone.

Going one further, Vodafone said that as well as a domestic network, 5G roaming will be made available to customers in Germany, Italy and Spain over the summer.

Vodafone has teased its new network over the past year with pop-up 5G sites across the country. Manchester airport and Birmingham's New Street train station were two of the locations where interested members of the public could go and see for themselves how fast 5G would be.

"We can today announce the largest launch of 5G in the UK and be the first to announce 5G roaming," said Nick Jeffery, CEO of Vodafone UK. "It means that UK businesses can lead the world in adopting 5G to boost productivity and attract investment."

"It means consumers can get the fastest mobile speeds ever, and it means that our public sector will be able to adopt new services to improve healthcare, social services and housing," he added.

As well as the network launch date, Vodafone announced a set of technology partnerships with the esports company ESL, MediaCity in Salford and the Ricoh Arena where IoT devices will be fitted to the stadium to "give fans the best-connected sporting seats in the country".

Compatible smartphones that will be supported through Vodafone are the Xiaomi Mi MIX 3 5G phone, the Samsung Galaxy S10 5G, the Huawei Mate X (5G) and the Huawei Mate 20 X (5G). Vodafone will also be offering its 5G Gigacube, a 5G router that will deliver 5G speeds to non-5G devices later this summer.

EE announced yesterday that the carrier would be exclusively offering the new 5G-ready OnePlus 7 as part of its 5G network that will launch "imminently" according to BT's annual financial report.

The company is also hosting an "exciting" event next week, the details of which aren't known but its believed to be the announcement of its own switch-on date.

Elsewhere, other major carriers have been largely silent on the 5G front. O2 has a command of the 4G network in the country with the likes of Giff Gaff also siphoning its 4G network for its own customers.

Three has teased a 2019 launch of its 5G network, a claim that was further reinforced by sightings of the video below in one of its flagship London stores.

Unlike the British government, which is still yet to make a decision on whether to let Huawei play a role in the nation's critical 5G infrastructure, Vodafone has deployed the Chinese firm's equipment for its network.

Huawei provides market-leading equipment at highly competitive prices so it's difficult for carriers to pass up the opportunity to use this equipment, despite the security concerns.

No evidence of backdoors has been found in Huawei's modern equipment and carriers that already use Huawei infrastructure in their 4G networks would face even more if they choose to go with a new vendor. It's much more economical to stick to one vendor than stripping out old equipment and replacing it with a new vendor's.