EE's 5G network will launch 30 May

Leaving little notice between announcement and launch, EE will be the first UK network to be switching on its next-generation network 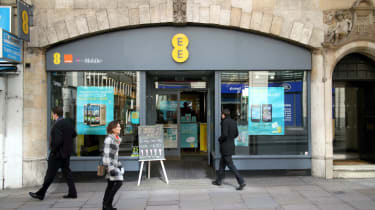 EE has announced the launch of its 5G network for a start date of 30 May, with the company's CEO Marc Allera saying that speed and reliability will be the key parts of the network during the first year of its launch.

The network was trialled at St Paul's in London recently where speeds of more than 500Mbps were recorded, Allera said customers can expect to enjoy speeds of 1Gbps this year.

"There will be customers on EE this year that will break the 1GBps milestone," he said. "The peak speed might be the headline, but it's not the story".

The initial 5G launch will be just a taste of what the network will eventually evolve to be over the next few years and across the three phases of the network's road map that will extend to the year 2023, culminating in a network so efficient that mission-critical applications such as autonomous cars will become a reality. The mmWave spectrum that could enable the fastest speeds possible on 5G will not be part of the initial launch, but Allera said "it could possibly be part of phase 2" of EE's roadmap.

"This represents a landmark moment for the UK, as EE will be the first operator to launch commercial 5G services," said telco analyst Paolo Pescatore. "It is quite an accolade which builds upon its early mover advantage in 4G and firmly reinforces its network leadership over rivals."

The six cities that will receive 5G first will mainly enjoy it in outdoor settings as the network will be working on better indoor coverage later this year. The 5G network will struggle more with physical blockages such as buildings so this will be a challenge that may take time to overcome.

In London, the focus will be on the most densely populated areas which means places such as Covent Garden, the Tower of London, St Paul's and Wembley will be the very places Londoners will be able to go and test out the network.

"We're adding 5G to the UK's number one 4G network to increase reliability, increase speeds, and keep our customers connected where they need it most," said Allera. "5G will create new experiences with augmented reality, make our customers' lives easier, and help launch entirely new businesses that we haven't even imagined."

SMEs located in the supported cities will be able to upgrade their business' 4G network to 5G immediately, according to Gerry McQuade, CEO BT Enterprise. SMEs will also have access to specialised 5G plan benefits including a terabyte data allowance, a data reserve just in case the data allowance is exceeded, a dedicated threat detection app and bespoke MobileIron Platinum security measures.

"MobileIron has partnered with EE to include Mobile Threat Defence across all of its 5G SME business plans," said Shamitha Widanapathirana, global account director at MobileIron. "This provides enterprise-grade security to small and medium businesses that face many of the same challenges as larger enterprises and will enable them to work from mobile securely.

"There is no doubt that 5G will play a leading role in shaping the modern world and enable SMEs to truly leverage the power of mobile working," he added. "However, security is essential if businesses want to become genuinely mobile without putting sensitive company data at risk."

EE will be powering the next generation of emergency service networks in the UK with its partner Samsung providing the devices to the emergency services as well as all Home Office handsets.

EE becomes the second mobile network operator (MNO) to announce an exact launch date for its 5G network, with Vodafone announcing a 3 July date last week, it just announced its launch date with less notice. Elsewhere, O2 and Three have both said their own 5G network at some point in 2019 - the former confirms fewer initial rollout cities than either EE or Vodafone.

EE has arguably been the most prominent of all the carriers in regards to the marketing of its 5G network. It has been outspoken for the better part of a year and was the first carrier to name the number of cities that would receive the next-gen network back in November.

EE has long had a partnership with OnePlus and aside from the next-gen launches they announced today, the companies, together with Qualcomm, will be working on and inviting developers to contribute to a project geared towards pioneering the next "killer app" - like how 4G enabled the birth of apps such as Uber.

Marc Allera said today that, together with OnePlus, app developers have already approached the companies with new and "great ideas" but assured that everything is still in the early stages of development and nothing concrete has been invented yet. He didn't detail any of those initial ideas, though.

Unlike other areas of BT's business, EE is performing well, better than any other arm of BT's overall portfolio. EE currently has a command of the mobile network market, beating O2 which was previously considered the most prevalent network in Britain.

The rollout of 5G has been much anticipated and after all the excitement and promises made by MNOs over the past year, we're still not likely to see anything more than faster speeds for at least a year or two. The network is said to be the enabler of new technology but until businesses get a good handle on it, we'll have to wait for some new use cases.