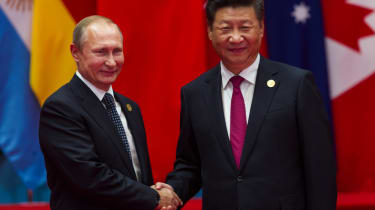 Huawei has signed a deal with Russian telecoms company MTS to deploy its 5G infrastructure across the country over the next year.

The agreement was made as a sideline to a meeting in Moscow between Chinese leader Xi Jinping and Russian president Vladimir Putin on Wednesday. Xi described Putin as a "close friend", according to The Guardian, during his eighth trip to Russia since 2012.

Both countries have strained relationships with the US, with the Kremlin accused of meddling in the US 2016 presidential elections, while China is locked into a toxic trade war with Washington.

Seemingly at the centre of the trade war is Huawei, which was placed on a trade blacklist by the US due to national security concerns, banning American companies from selling technology to the Chinese firm.

Now, with US allies in the West considering what action to take with regards to Huawei and its 5G infrastructure, the Chinese firm has turned to Russia, striking a deal with telecoms firm MTS.

Formerly known as Moscow City Telephone Network, MTS is a mobile network operator based in Moscow that operates in Ukraine, Armenia and Belarus. Although the Huawei deal is restricted to Russia, MTS said to serve over 78 million subscribers in that region alone.

US president Donald Trump seemed to suggest the company could be used as a sort of bargaining chip in the trade talks with China, however, Huawei has seen a number of US companies already comply with the ban - notably ARM, which provides chips for its smartphones, and Google, which has said it will block Huawei's access to its Android operating system.

On Monday, it was reported in the South China Morning Post that Huawei was considering cutting production targets for its smartphones.

The deal will see "the development of 5G technologies and the pilot launch of fifth-generation networks in 2019-2020", MTS said in a statement, according to AFP.

Also quoted in the statement, Huawei's rotating chairman Guo Ping, said he was "very happy" with the agreement "in an area of strategic importance like 5G".