View from the airport: Cisco Live US 2019 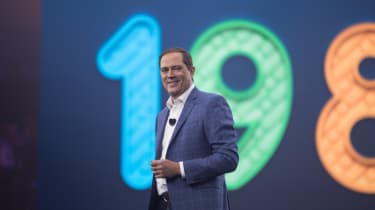 I spent the past week in sunny San Diego, getting sunburnt by the Californian sun while wafts of sea air graced my nostrils as I attended every session of a jam-packed Cisco schedule - a far cry from the "life-threatening" weather experienced in the UK last week.

But it wasn't the fabulous weather that stole the show, far more compelling topics of conversation floated around the San Diego Convention Centre at the company's annual US event. If you haven't been following the coverage this week, here are my main takeaways from the keynotes, expert panels and intimate press conferences.

Arguably the hottest topic of the conference was the Huawei ban and the ever-escalating US-China trade war and how the US networking giant would fit into the equation. CEO Chuck Robbins joked about being able to predict that we'd bombard him with questions on the matter in the intimate press conferences we attended - and bombard him we surely did.

He said it was ignorant' and a "fallacy" to think that it would have an industry-wide effect, providing mobile network operators (MNOs) don't pursue a single-vendor approach to their 5G infrastructure.

It's no secret that a single-vendor approach is considered bad practice at least, and hugely detrimental to security and business growth at most. So it shouldn't come as a surprise that Robbins said this, but it was nice to hear a fresh and level-headed take on the bustling drama that's been unfolding for the past few months.

One of the most exciting things about connectivity in the years to come is the seamlessness that we can expect and a feeling of being able to access superfast internet anywhere and everywhere. With Wi-Fi 6 around the corner and as 5G coverage becomes more widespread, we can expect superfast internet indoors and outdoors and the handoffs between indoor Wi-Fi and outdoor 5G will be seamless.

It all sounds idyllic, but I didn't hear anything about rural connectivity - an area vendors seem to be freely sidestepping in favour of 5G promotion, the networking wunderkind.

While an internet-everywhere world sounds great, what's likely to happen is a similar situation as we have now. Most places will be 5G connected in years down the road but there will also probably be mobile dead zones like there is now. Rural land will always be an afterthought and will forever lag behind the city slickers.

One of the areas which MNOs went wrong at the launch of 4G was that they didn't hop on board the data monetisation trend like other internet giants did. Revenue streams were limited to subscriptions and data plans but because 5G has a stronger business case than its predecessors, leading to greater investment from the enterprise, new revenue streams become available.

"When you provide personalisation, there's money to be had," said Bob Everson, director of business development on 5G, multi-cloud updates at Cisco.

MNOs will have the opportunity to deliver network slicing which you can think of as a network as a service type of offering. This could be a large slice such as VW buying 5G bandwidth for its connected cars or it could be small like a company specialising in a highly niche, specialised service. In either event, with more money comes greater potential for innovation - the type of innovation that the industry has been crying out for.

What's the killer app that 5G will enable' - a question asked by many reporters this week. The global ride-hailing phenomenon Uber exists purely because 4G allowed it to be, so what's 5G's Uber? The truth is, we still don't know but as MNOs generate more money to play with, we can expect them to produce a faster development cycle for that next big thing we're all itching to see.

Internet of Things (IoT) didn't exactly steal the show at Cisco Live, but was definitely worth an honourable mention here, given the company's obvious commitment to the technology. In its latest line up of Cisco DevNet certifications, an IoT architect features as one of the newcomers in the refreshed line of industry qualifications - and was one that David Goeckler, EVP/GM at Cisco's networking and security business was particularly keen to shout about.

The qualification signals confidence in the technology that's still yet to make a massive impact on business and points to the possibility that we could be about to see a lot more of IoT in the coming years. With more IoT-certified professionals we can expect new and exciting use cases for the technology that will thrive in an always-connected world driven by a co-existence of Wi-Fi and 5G.

Above all this, one theme that kept rearing its head throughout the show was Cisco's push on their intent-based networking narrative. By intent-based networking, it refers to its smart domain policy and assurance integrations, hailed by Gartner, that allows a network to become more agile, and have just been made available to IoT customers.

Cisco execs swarmed the keynote stage to sing the praises of this relatively new architecture which automates network functions to reduces outages by 50%. Cisco seemed to echo Gartner's statement that intent-based networking will be "the next big thing" so we can expect it to feature more heavily in Cisco products in the years to come.

Overall, I think networking buffs would have come away from Cisco Live with a lot to think about. The interaction between 5G and Wi-Fi 6 was refreshing to hear amid the hype around 5G and businesses will rejoice in knowing they won't be as reliant on the mobile technology as some have thought previously.

The Huawei saga will continue to warp and mutate over the course of the year, meaning Cisco's role in the US telecoms infrastructure market is likely to take a more concrete shape after the dust settles on the US blacklist. We'll keep a close and keen eye on how the company plans to capitalise on this new opportunity.