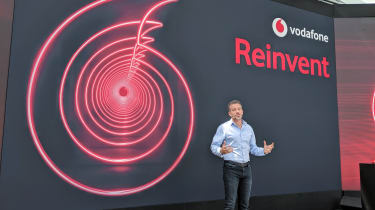 Vodafone outlined a clear vision at the company's 5G network launch: 5G plans with uncapped data usage will be the industry norm as the world's insatiable appetite for data continues to grow at exponential rates.

At an exclusive media roundtable following the switch-on delivered by Lewis Hamilton, an F1 driver brought in as a thinly-veiled living metaphor for the speed of the company's network, CEO Nick Jeffery was asked if the future of 5G plans was unlimited.

"We would hope so," said Jeffery. "It's a good question because what we're announcing today we believe is innovative and it is a big announcement, it's a big evolution in how the market thinks about its customers."

It's an interesting insight into what the future offerings and services delivered by global telcos could look like. As of now, there are little-to-no unlimited data plans for 4G LTE networks. According to uSwitch, just three SIM-only deals are available in the UK with unlimited data usage offered by Three, Virgin Mobile and Smarty.

As executives swapped and took their turns on stage, it was made apparent that the industry is thinking about data all wrong. When looking at the statistics, it's clear to see that appetite for data is growing but data plans curiously remain unchanged.

"Data growth is doubling every two years and what's behind this is exponential growth in high-end formats," said Max Taylor, Vodafone's consumer director. "New formats such as 4K VR will consume 15GB of data in an hour.

"The truth is, data usage on a network and content quality is polarising, yet we as an industry we're still using the same propositions focussing on the gigabyte allowances alone. We need to change.

"We believe it's time to start to differentiate our offerings based on [user] experience, not just gigabyte allowances."

While the changes to data plans are almost certainly welcome to data-hungry customers, some industry experts question the sustainability of the business model, representing "a monumental challenge in how to make money".

"This is something that the industry needs to be careful with. Margins are being squeezed as ARPUs are not rising but costs are," said telco analyst Paolo Pescatore. "We are only at the start of the 5G journey and billions still need to be spent on spectrum and rolling out networks. Telcos must introduce new services and use cases in order to get ROI.

"For consumers, unlimited is great as they do not need to worry additional costs," he added. "In the new 5G world, people's insatiable appetite for data will only continue to grow."

Vodafone UK will have to be careful in its pricing if it's going to continue its revenue growth, a feat only managed for the first time since 2014.

But Jeffery opened the launch event by explaining the company's strategy in the market, the one that's helped drive its business into much-needed growth and it's a strategy which, coupled with its competitive 5G plans, could stand the company in good stead for the years ahead.

"According to Ofcom, Vodafone UK has the best geographical coverage in the UK," said Jeffery. "We have the highest network satisfaction we've ever had since the measurement was invented and that's because we now have the best performing network.

Vodafone's billion-pound investment into the UK in recent years has restored its claim as a top operator in the country and the company hopes by "getting the basics right" it can gain market supremacy.

The need for unlimited data was evidenced in the early reviews of EE's 5G network when it launched at the end of May.

The BBC's Rory Cellan-Jones struck a technical glitch just before going live on air with the landmark new network. During a three-day testing period, the broadcaster ran out of data and the SIM needed topping up before he was able to go live.

The cheapest EE 5G plan offers just 10GB of data for 54 a month which isn't ideal considering 5G is supposed to enable faster downloads on the move, something consumers will be hesitant to do with data caps so low.