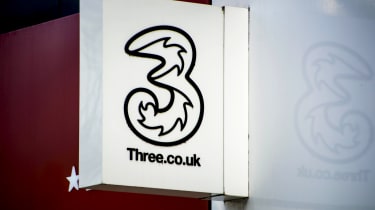 EE is one of five complainants that have approached the Advertising Standards Authority (ASA) regarding Three UK's marketing campaign which claims it's the only operator in the UK to offer "real 5G".

Three launched its 5G network yesterday but since June, the carrier has been marketing its network through TV, email, social media and direct SMS messages based on its exclusive ability to offer a "real 5G" experience.

The ASA will now launch an investigation into Three's "if it's not Three, it's not real 5G" advertising slogan and decide whether or not it's in breach with advertising regulations.

"Three's claim to be the only real 5G network is entirely false, and deliberately aimed at misleading consumers," said an EE spokesperson. "Our customers have been using real 5G since we launched the UK's first 5G network, back in May."

Three's defence to this, as described on a phone call with IT Pro, is that it based these claims off the standards set out by the International Telecommunication Union (ITU), which "indicate that to deliver a 5G network, you may need to have a minimum of 100MHz of 5G spectrum" said Three adding: "Right now, we're the only UK mobile network to have over this amount."

Three has a dedicated section on the 5G area of its website explaining exactly what is meant by "real 5G", reinforcing what was said on the call.

"Our advert is to inform consumers that we will offer the fastest 5G network, based on Three having three times as much 5G spectrum as any other operator," said the Three UK spokesperson. "We are also the only operator to have 100 MHz of contiguous spectrum. ITU considers this the gold standard for 5G, enabling consumers to take full advantage of what 5G has to offer." 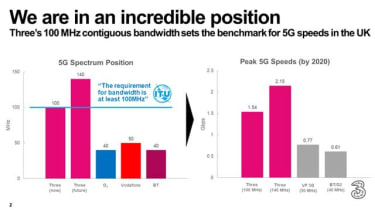 A spokesperson at the ASA also confirmed to IT Pro that a total of five complainants had approached the regulator regarding Three UK's marketing campaign. One was from BT (which owns EE) and the other four were from members of the public.

Vodafone, the only other operator to have an active 5G network in the UK, has chosen not to join the list of complainants at this time.

"We are getting on with rolling out 5G across the UK and offer our customers the service in more places than any other provider," said a Vodafone spokesperson.

However, the operator has previously voiced its concerns about the commanding position Three is in due to its spectrum holdings in its submission to Ofcom's review of the impact of the UK Broadband deal. "There is a real prospect that Three UK will have a monopoly in the provision of ultra-high speed, ultra-high bandwidth services," it said.

Right now, Three is leading the spectrum holding by a huge margin. It has 140MHz of spectrum, 100MHz of which is contiguous, whereas Vodafone only has 50MHz - EE and O2 only have 40MHz each.

Three snapped up a decent amount of spectrum during Ofcom's 2018 spectrum auction but its 250 million acquisition of UK Broadband saw its spectrum holding skyrocket to the imposing lead it has now.

It also completed its official 5G launch on Monday but only as a home broadband service in one city, London, forgoing the mobile launches such as those of EE and Vodafone.

Three's service is arguably the most limited 5G launch in the UK so far, but it plans on rolling out the service to 25 towns and cities by the end of the year.