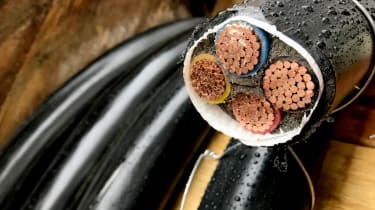 Internet access to more than 6,000 residents in South Cambridgeshire has been severely disrupted over the last couple of weeks due to vandalism and theft of copper cabling.

More than 2,200 people living in Cambourne were knocked offline after thieves made away with 500 metres of copper cabling last week, with phone lines also dead, according to Cambridgeshire Live.

The theft follows another incident just a matter of weeks ago. Approximately 4,000 homes and businesses were left without internet on 25 August because copper cables had been cut away on the outskirts of Cambourne.

Phone lines were also knocked offline in homes and shops in the village. A few days later, power cables, worth approximately 10,000, were found dumped more than ten miles away in a nearby village.

Crime Stoppers, in partnership with the firm that manages the infrastructure, Openreach, launched an appeal in the wake of the first incident offering 1,000 for information. Heavy damage was also caused to farmland where cables were dragged across fields, the organisation revealed.

"Our network has been damaged a number of times in recent weeks in Cambridgeshire, which is really disappointing," an Openreach spokesperson told IT Pro.

"On each occasion, hundreds of metres of underground cable has been taken, which is incredibly frustrating for people living there left without a telephone and broadband service.

"Our engineers repaired the damage as quickly as possible and restored services to those affected. We're working closely with Crimestoppers and ask people to be extra vigilant and report any suspicious activity to the police."

When internet outages occur, they are generally attributed to technical issues, or cyber attacks, as opposed to criminals digging up the cabling that feeds homes and offices.

Most recently, for instance, a portion of the web was knocked offline following a Cloudflare incident in July. The outage was caused by a massive CPU spike due to bad software deployment. This eventually led to many websites serviced by the networking firm to show 502 Bad Gateway' errors.

There have been a handful of copper theft incidents through the years, however. Nearly ten years ago, for example, more than 2,000 BT broadband and phone customers in Kent suffered heavy disruption after nearly 3km of cable was severely damaged.

Openreach has even dedicated a website to cable theft, with advice as to how people can prevent and report incidents, as well as a wider strategy to reduce incidents.